Cooper Tire & Rubber Company (NYSE: CTB) is a United States based company. They design, manufacture, marketing and sales replacement automobile and truck tires. With their subsidiaries they produce medium truck, motorcycle and racing tires. Their headquarters is in Findlay, Ohio. Cooper Tire has 60 facilities located around the world. 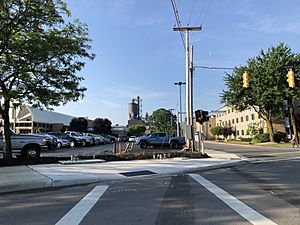 The company campus in Findlay, Ohio

The beginning for Cooper Tire was the M and M Company. M and M was formed by two brothers-in-law in Akron, Ohio in 1914. M and M made tire repair materials. M and M was bought by the Giant Tire and Rubber Company and moved to Findlay, Ohio. The site is still occupied by Cooper Tire and is next to The Cooper Corporation facilities. The Cooper name came from Ira J. Cooper in 1919. He formed a company to manufacture new tires. The Cooper Corporation, the M and M Company, and The Falls Rubber company merged in 1930 to form the Master Tire and Rubber Company.

During World War II the Master Tire and Rubber built military equipment, such as pontoons, waterproof bags, life jackets, and, tires. The company received the Army-Navy 'E' Award for excellence. The name was changed to Cooper Tire and Rubber Company in 1946.

Cooper Tire began a 51% owned joined venture with Shandong Chengshan Tire Co in 2006. They will produce truck and passenger car tires for Chinese and export markets. Cooper Tires is the second largest United States based tire company, after Goodyear.

In 1997, the tyre business of Avon Rubber PLC of Melksham, Wiltshire, in the United Kingdom was sold to Cooper Tire. The Cooper Tire site remains a major employer in central Melksham.

In addition to Avon, Cooper Tire manufactures tires under the brand names Dean, Mastercraft and Starfire.

Cooper is heavily involved in the sport of drifting by supplying tires to several drifters in both the Need for Speed Formula D Drift series and Canadian Drift series.