Findlay ( FIN-lee) is a city in and the county seat of Hancock County, Ohio, United States. The second-largest city in Northwest Ohio, Findlay lies about 40 miles (64 km) south of Toledo. The population was 40,313 at the 2020 census. It is home to the University of Findlay and is the principal city of the Findlay, OH Micropolitan Statistical Area.

Findlay is the Headquarters of Fortune 1000 companies Marathon Petroleum and Cooper Tire & Rubber Company, who rank 22 and 830 on the list respectively.

In the War of 1812, Colonel James Findlay of Cincinnati built a road and a stockade to transport and shelter troops in the Great Black Swamp region. This stockade was named Fort Findlay in his honor. At the conclusion of the war, the community of Findlay was born. The first town lots were laid out in 1821 by the future Ohio Governor Joseph Vance and Elnathan Corry.

Early in its history, prior to the Civil War, Findlay was a stop for slaves of African descent along the Underground Railroad. 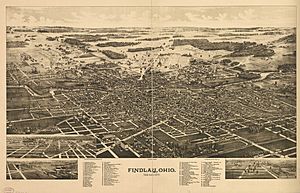 Panoramic map of Findlay (circa 1889)

During the 1880s, Findlay was a booming center of oil and natural gas production, though the supply of petroleum had dwindled by the early 20th century.

Findlay hosted the highly competitive Ohio State Music Festival in 1884. A young cornet player, Warren G. Harding, and his Citizens' Cornet Band of Marion placed third in the competition. Harding would go on to be elected the 29th President of the United States.

In 1908, American songwriter Tell Taylor wrote the standard, "Down by the Old Mill Stream" while fishing along the Blanchard River in Findlay. The song was published in 1910.

For three months in the early 1960s, Findlay had the distinction of being the only community in the world where touch-tone telephone service was available. Touch-tone service was first introduced there on November 1, 1960. 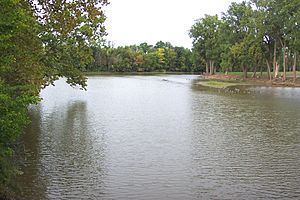 The Blanchard River as seen from Riverside Park in Findlay. 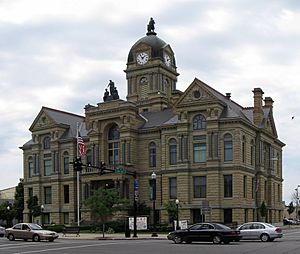 The Blanchard River travels through Findlay, flowing east to west.

The Findlay Reservoir No. 2 is the largest above ground reservoir in the state of Ohio with a capacity of approximately 5 billion US gallons (19,000,000 m3) of water.

Findlay Airport does not have regularly scheduled passenger flights. Interstate 75, US 68, and US 224 are major highways that pass through the city. State routes in the city of Findlay include: Ohio State Route 12, Ohio State Route 15, Ohio State Route 568, and Ohio State Route 37. There were 3 major cab companies based in and operated in and around Findlay and Handcock County. The most notable are Accurate Cab co which went out of business in 2019–2020, USA Cab and Trinity Express Cab. While Black & White Transportation Cab will operate in Findlay, they are based out of Toledo, Ohio. 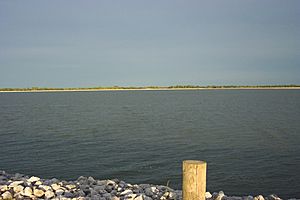 Findlay Reservoir No. 2, the largest above-ground reservoir in the state

Findlay is the headquarters of the Cooper Tire & Rubber Company, founded in 1914, which specializes in the design, manufacture, marketing, and sales of replacement automobile and truck tires, and subsidiaries that specialize in medium truck, motorcycle, and racing tires.

Findlay is home to the Whirlpool dishwasher manufacturing plant and distribution center. This plant is considered to be the largest dishwasher plant in the world (based on production).

According to the City of Findlay 2019 Comprehensive Annual Financial Report (CAFR), the following companies are the top employers in the city:

There are four intermediate (3–5) buildings, four primary (K-2) buildings, and one K-5 building within the Findlay City School system as well.

For decades, students attended one of three junior high schools: Donnell (Atoms), Central (Spartans), or Glenwood (Eagles). The original Donnell School building located on Baldwin Avenue was razed in 2012 to make room for the construction of a new building, which began usage in January 2013. Another new school built directly behind the original Glenwood building on North Main Street officially opened and began usage in January 2013. The building known as Central, located on West Main Cross, was originally Findlay's high school (until the current high school was built in 1963). Once the two new middle schools were opened, part of Central was razed, leaving only the auditorium. A new Performing Arts Center (funded mainly by Marathon Petroleum) was constructed by refurbishing and renovating Central's auditorium, finishing in December 2015.

Findlay High School is a comprehensive high school with an enrollment of 1,632 students in grades 9–12. Of the 130 professional staff, 87 have master's degrees or beyond. Accreditation has been granted by AdvancEd Accreditation. 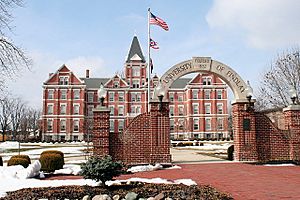 The city is home to the University of Findlay, a private liberal arts college with an enrollment of over 4,100 students, and Owens Community College, a state school with an enrollment of 2,391 students. The University of Findlay is best known for its programs in Education (undergraduate and Master's) and the equestrian studies programs. Students enrolled in the Pre-Veterinary or western equestrian studies have access to a 152-acre farm operated by the university. Those students who are pursuing a degree in English equestrian studies have access to a separate rural facility composed of 32-acres, which includes the University Equine Veterinary Services Inc.

Winebrenner Theological Seminary also makes its home in Findlay, adjacent to the university. Findlay also had a branch location of Brown Mackie College prior to 2017.

The city has the main branch of the Findlay-Hancock County Public Library. The library was established on April 16, 1888 and was originally housed in the Hancock County Courthouse basement until it was able to move into an old post office building in 1935. The main library building was renovated in 1991, and again in 2009 after a major flood. The library announced in March 2019 it would end the process of charging late fees.

All content from Kiddle encyclopedia articles (including the article images and facts) can be freely used under Attribution-ShareAlike license, unless stated otherwise. Cite this article:
Findlay, Ohio Facts for Kids. Kiddle Encyclopedia.