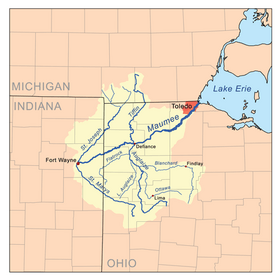 Map of the Maumee River watershed showing the Blanchard River.

The Blanchard River is a 103-mile-long (166 km) tributary of the Auglaize River in northwestern Ohio in the United States. It drains a primarily rural farming area in the watershed of Lake Erie.

The river is named for Jean Jacques Blanchard (1720-1802), a French tailor who settled among the Shawnee along the river in 1769. Fort Findlay, an American outpost in the War of 1812, was constructed along the river in 1812 at the site of the present-day city of Findlay.

In 1908, Tell Taylor wrote Down by the Old Mill Stream, a popular song of the early 20th Century and a barbershop favorite, while sitting on the banks of the Blanchard River.

On November 28, 2012, officials from Hancock and Putnam counties traveled to Washington D.C. to lobby for $1.7 million in federal funding to complete phase three of the Blanchard River Flood Mitigation study.

According to the Geographic Names Information System, the Blanchard River has also been known as:

All content from Kiddle encyclopedia articles (including the article images and facts) can be freely used under Attribution-ShareAlike license, unless stated otherwise. Cite this article:
Blanchard River Facts for Kids. Kiddle Encyclopedia.