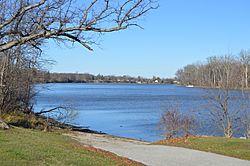 Along the Auglaize near Junction

The Auglaize River (Shawnee: Kathinakithiipi) is a 113-mile-long (182 km) tributary of the Maumee River in northwestern Ohio in the United States. It drains a primarily rural farming area in the watershed of Lake Erie. The name of the river was derived from the French term for it. The French called it "rivière à la Grande Glaize" (later spelled as "glaise", meaning river of Great Clay), referring to the soil in the area.

During the days of the Ohio Country in the 18th century, the area around the river was inhabited by the Ottawa. During the mid-1790s the area near the mouth of the Auglaize surpassed Kekionga to the west as the center of Indian influence. Fort Defiance was constructed in 1794 near the confluence of the Auglaize and the Maumee by General Mad Anthony Wayne. Fort Amanda, constructed along the river southwest of Lima in 1812, was an important American outpost during the War of 1812.

According to the Geographic Names Information System, the Auglaize River has also been known as:

All content from Kiddle encyclopedia articles (including the article images and facts) can be freely used under Attribution-ShareAlike license, unless stated otherwise. Cite this article:
Auglaize River Facts for Kids. Kiddle Encyclopedia.