Kids Encyclopedia Facts
This page is about the tributary of the Auglaize River. For the river near Toledo, see Ottawa River (Lake Erie). 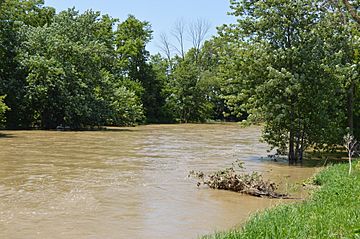 It rises in northern Hardin County and flows northwest, then west-southwest through Lima. Approximately 2 miles (3 km) southeast of Lima it turns abruptly north, flowing into western Putnam County and joining the Auglaize from the southeast approximately 3 miles (5 km) northwest of Kalida.

The Ottawa River is also known locally and historically as "Hog Creek". The origin of this name is ascribed to the following legend:

Alexander McKee, the British Indian Agent, who resided at the Machachac towns, on Mad River, during the incursion of General Logan from Kentucky in 1786, was obliged to flee with his effects. He had a large lot of swine, which were driven on to the borders of this stream, and when the Indians (Shawnee) came on they called the river Koshko Sepe, which in the Shawnee language signified 'The Creek of the Hogs, or Hog Stream'.

All content from Kiddle encyclopedia articles (including the article images and facts) can be freely used under Attribution-ShareAlike license, unless stated otherwise. Cite this article:
Ottawa River (Auglaize River tributary) Facts for Kids. Kiddle Encyclopedia.