Hardin County is a county located in the west central portion of the U.S. state of Ohio. As of the 2020 census, the population was 30,696. Its county seat is Kenton. The county was created in 1820 and later organized in 1833. It is named for John Hardin, an officer in the American Revolution.

Hardin County Airport (FAA LID: I95) is the largest paved facility and is located 3 miles south of Kenton, Ohio on CR 135. The runway is 4,803 feet long at an elevation of 1,030 feet. Maintenance, fuel and storage are available.

Currently there is a working Artesian aquifer operating in the county. 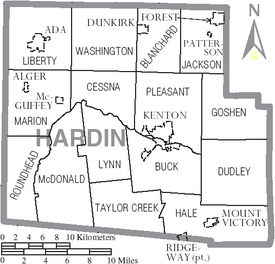 Map of Hardin County, Ohio with Municipal and Township Labels

From Alger From Dunkirk

All content from Kiddle encyclopedia articles (including the article images and facts) can be freely used under Attribution-ShareAlike license, unless stated otherwise. Cite this article:
Hardin County, Ohio Facts for Kids. Kiddle Encyclopedia.