Putnam County is a county located in the northwestern part of the U.S. state of Ohio. As of the 2020 census, the population was 34,451. Its county seat is Ottawa. The county was created in 1820 and later organized in 1834. Its name is in honor of Israel Putnam, a colonial hero in the French and Indian War, who served as a general in the American Revolutionary War. The Blanchard River, which passes through the county, was a key transportation route for early European-American settlers. 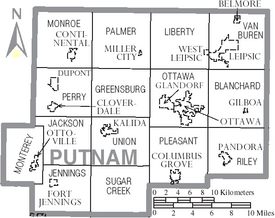 Map of Putnam County, Ohio with municipal and township labels

Other villages across the county are served by one or more of these districts above in the district's zone area.

All content from Kiddle encyclopedia articles (including the article images and facts) can be freely used under Attribution-ShareAlike license, unless stated otherwise. Cite this article:
Putnam County, Ohio Facts for Kids. Kiddle Encyclopedia.