Wapakoneta, is a city in and the county seat of Auglaize County, Ohio, United States, about 56 miles (90 km) north of Dayton and 83 miles (134 km) south of Toledo. The population was 9,867 at the 2010 census. It is the principal city of and is included in the Wapakoneta, Ohio Micropolitan Area, which is included in the Lima–Van Wert–Wapakoneta, OH, Combined Statistical Area.

Wapakoneta was an important site to the Ottawa Native Americans prior to their leaving Ohio. By 1798, the Shawnee Native Americans had made Wapakoneta their territory and displaced the Ottawa. By 1808, there were reports of more than five hundred Shawnee, Seneca of the Iroquois, and Mingo Native Americans living at Wapakoneta, including Black Hoof. The name Wapakoneta is derived from Shawnee Wa·po’kanite 'Place of White Bones' (wa·pa 'white'+(h)o’kani 'bone'+-ite locative suffix).

Euro-American settlers quickly replaced the native population. In 1848, the Ohio legislature created Auglaize County out of parts of Mercer and Allen counties. Early county voters chose Wapakoneta as the county seat in a disputed contest with rival town Saint Marys. For the next 150 years, Auglaize County residents primarily were devoted to agriculture, although several additional industries existed in the city by the late nineteenth century. During the 1880s, an oil and natural gas drilling industry arose. Wapakoneta's 2,765 residents also claimed to produce more butter churns than any other single location in the United States during this same time period.

In 2000, more than nine thousand people called Wapakoneta home. Many residents find employment at General Aluminum, Wapakoneta City Schools, Koneta Rubber Co. and companies outside Wapakoneta proper. It was mentioned in the movie Third Finger, Left Hand as the hometown of character Jeff Thompson, who repeatedly got strange looks when he would say where he was from. Wapakoneta has seen many business additions in the last several years, including Walmart, Lowes, and local restaurant chain Happy Daz.

Wapakoneta is located on the Auglaize River and includes portions of Duchouquet, Pusheta, and Moulton Townships.

Wapakoneta has one sister city, as designated by the Sister Cities International: 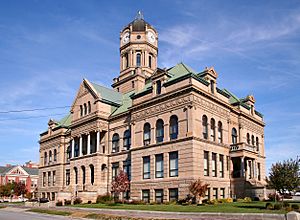 Wapakoneta is home to Wapakoneta High School. The city has a public library, the main branch of the Auglaize County Public Library.

Wapakoneta is Armstrong's birthplace, and has several places named after him, such as the Armstrong Air and Space Museum, operated by the Ohio Historical Society, and Neil Armstrong Airport.

All content from Kiddle encyclopedia articles (including the article images and facts) can be freely used under Attribution-ShareAlike license, unless stated otherwise. Cite this article:
Wapakoneta, Ohio Facts for Kids. Kiddle Encyclopedia.