The Defiance Moraine trends across the entire state of Ohio

Defiance is a city in and the county seat of Defiance County, Ohio, United States, about 55 miles (89 km) southwest of Toledo and 47 miles (76 km) northeast of Fort Wayne, Indiana, in Ohio's northwestern corner. The population was 16,494 at the 2010 census.

The city contains the site of Fort Defiance, built by General "Mad" Anthony Wayne in August 1794, during the Northwest Indian War, at the confluence of the Auglaize and Maumee rivers. General Wayne surveyed the land and declared to General Scott, "I defy the English, Indians, and all the devils of hell to take it." This area became Fort Defiance. Today a pair of cannons outside the city library on the Maumee River overlook the confluence and mark the location of Fort Defiance, along with a mounded outline of the fort walls. The city was named after Fort Defiance.

From Fort Defiance, the U.S. forces moved northeast along the Maumee River to fight the decisive Battle of Fallen Timbers near the current town of Maumee, Ohio. This victory secured for the United States the Northwest Territory, now the states of Ohio, Michigan, Indiana, Illinois, and Wisconsin.

Fort Winchester was built on the same spot during the War of 1812, but it was a larger fort that extended southward somewhat along the Auglaize River. Historical plaques in the sidewalks mark the full extent of Fort Winchester.

Defiance lends its name to a distinct end moraine from the Wisconsian glaciation. As Cushing et al. point out, "The Defiance moraine represents the last notable stand of the glacial front in this region." The moraine varies in width from 2 to 4 miles, and according to Leverett, "it is like a broad wave whose crest stands 20 to 50 feet above the border of the plain outside it."

Defiance has several city parks that offer a variety of recreational activities, including baseball and softball diamonds, and playground equipment. These parks include Kingsbury Park and Diehl Park. Kingsbury Park has a public swimming pool.

Independence Dam State Park, 4 miles east of the city on State Highway 424, along the Maumee River, is also a popular recreational site for area residents. The park provides picnic facilities, nature trails, and fishing. There is a reservoir with adjacent trails, along with a track up top. There is also a Frisbee golf course. On the other side, there is a dog park. 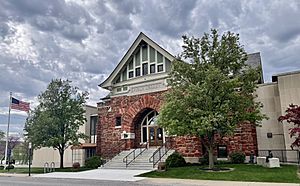 Defiance College is a small liberal arts college affiliated with the United Church of Christ and has an enrollment of about 1,000 students.

Defiance has a public library, a branch of the Defiance Public Library System.

All content from Kiddle encyclopedia articles (including the article images and facts) can be freely used under Attribution-ShareAlike license, unless stated otherwise. Cite this article:
Defiance, Ohio Facts for Kids. Kiddle Encyclopedia.