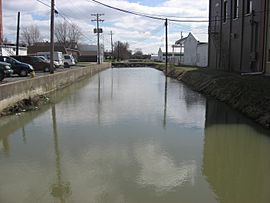 Remaining section of the canal in downtown Delphos

Delphos had its start in the early 1850s when the neighboring rival towns of East Bredeick and Howard merged. The city's name is derived from the Greek god Delphus.

Three Delphos buildings are listed on the National Register of Historic Places: the Marks-Family House and St. John's Catholic Church on the Allen County side of the city, and the Bredeick-Lang House on the Van Wert County side.

All content from Kiddle encyclopedia articles (including the article images and facts) can be freely used under Attribution-ShareAlike license, unless stated otherwise. Cite this article:
Delphos, Ohio Facts for Kids. Kiddle Encyclopedia.