Van Wert is a city in and the county seat of Van Wert County, Ohio, United States. The municipality is located in northwestern Ohio approximately 77 mi (123 km) SW of Toledo and 34 mi (54 km) SE of Fort Wayne, Indiana. The population was 10,846 at the 2010 census. It is the principal city of and is included in the Van Wert Micropolitan Statistical Area, which is included in the Lima-Van Wert-Wapakoneta, Ohio Combined Statistical Area. Van Wert is named for Isaac Van Wart, one of the captors of Major John André in the American Revolutionary War. A center of peony cultivation, Van Wert has hosted the annual Van Wert Peony Festival on and off since 1902. Van Wert is home to the first county library in the United States, the Brumback Library. It also has a thriving community art center, the Wassenburg Art Center, and the award-winning Van Wert Civic Theatre. The home office of Central Insurance Companies is located in Van Wert.

Van Wert was surveyed in 1824 by Captain James Riley, who was contracted by the government to survey lands purchased from Native Americans under a treaty in 1818.

The town is located in an area originally known as the Black Swamp. Early pioneers had to deal with swampy ground, mud, and malaria. They persevered, draining the swamp for agriculture and eventually reclaiming enough dry land to establish the town. Van Wert was the birthplace of aviation pioneer Walter Hinton and the famous baritone Charles W. Clark.

At one point, Van Wert was the only place in the world producing Liederkranz cheese. This pungent dairy product was made at the now-closed Borden plant.

The people of Van Wert (400 of which called themselves "Cheesemakers") contributed to the town of Vimoutiers, Orne, Lower Normandy, France with help in the costs of reconstruction and reparation of the town after it was mistakenly bombed by the US Air Force during World War II. They volunteered to pay for the replacement of Marie Harel's statue. This is recorded by a plaque in the market square of Vimoutiers. Vimoutiers is a centre for local making of Camembert, Livarot and Pont-l'Évêque cheeses.

On November 10, 2002, an F4 tornado ripped through the town, killing two people. This was one of many tornado touchdowns during the Veterans Day Weekend Outbreak. Van Wert's emergency warning system is credited with saving many lives after several cars were thrown into a movie theatre that had been packed with people just minutes earlier. 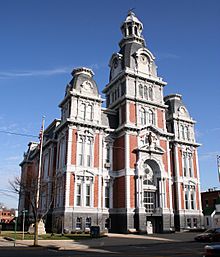 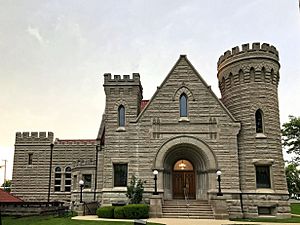 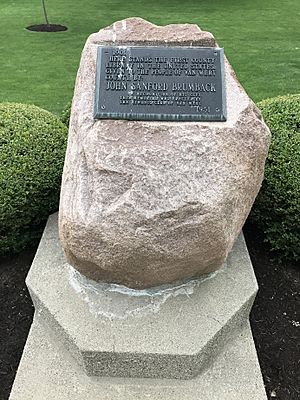 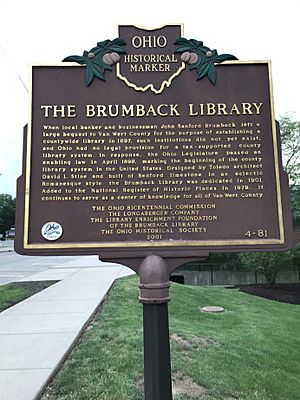 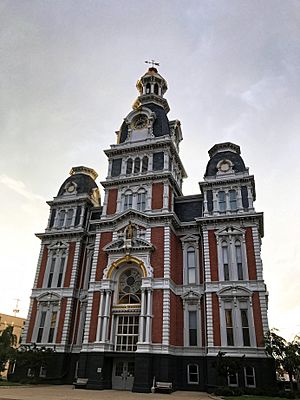 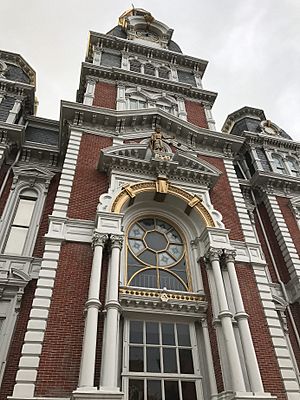 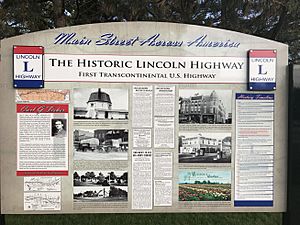 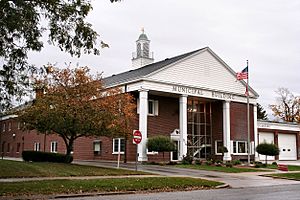 Van Wert has the main branch of the Brumback Library.

All content from Kiddle encyclopedia articles (including the article images and facts) can be freely used under Attribution-ShareAlike license, unless stated otherwise. Cite this article:
Van Wert, Ohio Facts for Kids. Kiddle Encyclopedia.