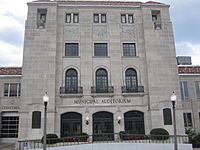 Municipal Auditorium is located in the City Hall complex in Texarkana, Arkansas. 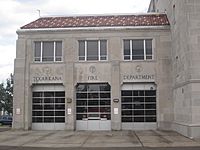 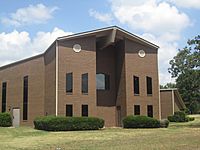 Highland Church of Christ at 1705 Highland Street in Texarkana, Arkansas

Texarkana is the largest city and the county seat of Miller County, Arkansas, United States. Texarkana is a Twin city with Texarkana, Texas, along State Line Avenue.

According to the 2010 census, the population of the city was 29,919, ranking it as the state's 12th largest city, behind Hot Springs. The city, along with its Texas counterpart, forms the central city of the Metropolitan Statistical Area, encompassing all of Bowie County, Texas, and Miller County, Arkansas. The combined population of the two Texarkana cities was 66,330 at the 2010 census.

The climate in this area is characterized by hot, humid summers and generally mild to cool winters. According to the Köppen Climate Classification system, Texarkana has a humid subtropical climate, abbreviated "Cfa" on climate maps.

All content from Kiddle encyclopedia articles (including the article images and facts) can be freely used under Attribution-ShareAlike license, unless stated otherwise. Cite this article:
Texarkana, Arkansas Facts for Kids. Kiddle Encyclopedia.