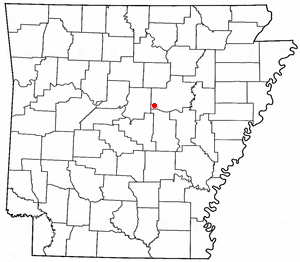 El Paso is an unincorporated community in southwestern White County, Arkansas, United States. Its name is Spanish for "the pass", referring to a small gap in the hills on the community's northern edge. Once known as Peach Orchard Gap in its early settlement, the origin of El Paso's Spanish name is unknown.

The historic Southwest Trail, a path used by most travelers entering Arkansas early in the 1800s, entered El Paso on today's Arkansas Highway 5 from Floyd, then headed to Gibson via Arkansas Highway 89, Tate's Mill Road and Batesville Pike Road. By the 1830s more than 80 percent of the Arkansas territory's population had entered through the Southwest Trail. The route is also known as the Old Military Road.

Much of the community is situated along Bull Creek, and along Arkansas State Highway 5 and U.S. Highway 64. Lacking exact boundaries, the community is located within the borders of El Paso Township, within White County.

The closest city is Vilonia, approximately 7 miles to the west of El Paso via U.S. 64. Beebe, where El Paso's children attend public schools, is about 13 miles to the east along this highway. Along Arkansas 5, Cabot is 15 miles to the south, and the unincorporated community of Romance is 8 miles north.

Vendors of tornado shelters, answering service and small gift items are among the cluster of businesses found at the intersection of the two major highways in El Paso. Many commuters typically pass through the small community, prompting the construction of, among other things, Sawbucks, a very popular family eating establishment, and a McDonald's restaurant since the late 1990s. El Paso also is the home of Rafter R Logistics, LLC and R & R Transportation Solutions, LLC.Most notably is the new CrossRoads Cowboy Church and 2 bar 2 Arena.

El Paso is in the Beebe School District.

Virginia Morris Johnson, the first woman to run for the office of governor of Arkansas was reared during her childhood in El Paso.

All content from Kiddle encyclopedia articles (including the article images and facts) can be freely used under Attribution-ShareAlike license, unless stated otherwise. Cite this article:
El Paso, Arkansas Facts for Kids. Kiddle Encyclopedia.