Cabot is the largest city in Lonoke County, Arkansas, United States and a suburb of Little Rock. According to 2010 U.S. Census Bureau estimates, the population of the city is 23,776, ranking it as the state's 20th largest city, behind Paragould. It is part of the Little Rock–North Little Rock–Conway Metropolitan Statistical Area. Cabot has the third highest median household income in Arkansas (after Maumelle and White Hall).

Before the city of Cabot existed, an 1862 typhoid epidemic took the lives of about 1500 Confederate soldiers previously under Allison Nelson who were camped in the hills surrounding Cabot and nearby Austin, Arkansas. Four hundred twenty-eight poorly marked graves were exhumed in 1905 by a group of Confederate veterans and moved to a new site at Camp Nelson Confederate Cemetery located in Cabot on Rye Drive, just off Cherry Road between Campground and Mount Carmel Roads. Marble gravestones were placed over each grave and a large marble obelisk was erected to honor the dead. In 1982, a group of volunteers from Cabot began maintaining the cemetery, which had fallen into disrepair.

The city of Cabot began as a small settlement at a refueling station on the Cairo & Fulton Railroad. The settlement first appeared in 1873 and is thought to have been named after a railroad surveyor. First Baptist Church was established in 1876 and the Bank of Cabot (later merged into Centennial Bank) was founded in 1903. The city of Cabot was officially incorporated November 9, 1891 as the 139th city in Arkansas.

Cabot was often overshadowed in northern Lonoke County by the much larger city of Austin (originally named Oakland), which was briefly considered for the state capital. However, Cabot experienced growth during the 1950s and 1960s, due to its proximity to the Little Rock Air Force Base in nearby Jacksonville which opened in 1955. 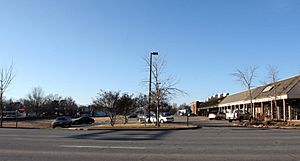 A devastating tornado hit downtown Cabot during the afternoon of March 29, 1976, killing five people and destroying multiple buildings. During the rebuilding of the city, it was decided to build a new city hall, municipal courtroom, library (since relocated), and police station on the site of the debris-filled dividing point between the east and west sections of Main Street, creating City Plaza. Highway 89, which follows the same path as West Main Street in Cabot, was redirected around City Plaza along one block of Second Street, to continue its path along Pine Street just south of the Cabot High School campus.

Cabot has experienced phenomenal population growth from the 1980s to today. New housing starts, as seen by new subdivided developments, now cover the town. One reason for such growth was the aforementioned Air Force base, while another is the top-rated school district.

On August 10, 2006, Cabot Junior High School North experienced a devastating fire which was believed to have started as a small electrical fire in the library caused by a faulty light bulb. Although there were 100 people in the building at the time, there were no injuries. The building burned from 2:30 p.m. to about 9:00 p.m., and the structure was a total loss. Cabot Fire and Police Departments say that this is one of the worst structure fires to have ever occurred in Cabot. The school was only about eight years old. It was rebuilt and reopened about three years later.

The climate in this area is characterized by hot, humid summers and generally mild to cool winters. According to the Köppen Climate Classification system, Cabot has a humid subtropical climate, abbreviated "Cfa" on climate maps.

There were 5,432 households out of which 47.1% had children under the age of 18 living with them, 65.7% were married couples living together, 10.7% had a female householder with no husband present, and 20.3% were non-families. 17.2% of all households were made up of individuals and 5.8% had someone living alone who was 65 years of age or older. The average household size was 2.78 and the average family size was 3.14.

In 1972, the Little Rock School District, slow to comply with the 1954 US Supreme Court case Brown v. Topeka Board of Education, was forcibly ordered by federal courts to immediately desegregate the school district. As a result, tensions rose and during the 1980s and 1990s Little Rock school district teachers repeatedly went on strike. Many residents chose to relocated to smaller communities around Little Rock, including Cabot, Benton, Bryant, Conway, and Maumelle. Over time, new arrivals to the state chose to live in these towns (now veritable suburbs) because, by some educational indicators, the school districts were more successful.

Cabot received many of the families that were relocating during that time period. As a result, a 'commuter culture' developed because many residents, that had children in Cabot schools, made the commute to Little Rock to work. As more people moved to Cabot to join the Cabot Commuter Culture, the tax base grew and as a result The Cabot School District steadily developed into one of the top-performing districts in the state.

Critics of Cabot's growth, such as the Little Rock-based newspaper Arkansas Times, accused these residents of "white flight": and of simply giving up on an integrated Little Rock school district. This accusation was despite the fact that Cabot (and northern Lonoke County as a whole) has historically been predominantly white and nearby towns, such as Austin, Ward, Vilonia, and Searcy, have also traditionally lacked diversity. Currently, the Cabot School District encompasses the north end of Lonoke County. The bulk of the county's population today can be found in approximately the same area, containing the county's most populous and fourth most populous cities — Cabot and Ward, respectively — in addition to Austin, which is among Arkansas' fastest growing communities.

Cabot has a movie theater that was built in the late 1990s, plus a growing number of restaurants, amateur sporting venues and community organizations. A new multimillion-dollar library/public meeting complex was completed and opened in 2015. The city has golf courses adjoining Greystone Country Club in the city's north end, and near Rolling Hills Country Club in southeast Cabot. Both of the country clubs and the Veterans of Foreign Wars post are exceptions to Cabot's legal status as part of a dry county, which prohibits the sale of alcoholic beverages elsewhere in the city.

One of the city's biggest events, staged in the downtown area each October, is Cabotfest — a community fair that has grown in popularity as the city's population has swelled over the years since the tornado. A similar event called Strawberry Fest is held annually in the spring.

Adam Richman, the host of Man vs. Food on the Travel Channel, came to Cabot's Mean Pig BBQ during the Season 2 "Little Rock" episode which aired on November 25, 2009 to try the Shut-Up Juice Challenge, which involves a large smoked pulled pork sandwich topped with coleslaw and "Shut-Up Juice" - barbecue sauce mixed with a tablespoon of concentrated, undiluted habanero extract.

There are 40 churches in Cabot. This gives the city a person to church ratio of 640 people per church.

All content from Kiddle encyclopedia articles (including the article images and facts) can be freely used under Attribution-ShareAlike license, unless stated otherwise. Cite this article:
Cabot, Arkansas Facts for Kids. Kiddle Encyclopedia.