Lonoke County is a county located in the Central Arkansas region of the U.S. state of Arkansas. As of the 2010 census, the population was 68,356, making it the eleventh-most populous of Arkansas's seventy-five counties. The county seat is Lonoke and largest city is Cabot. Lonoke County was formed on April 16, 1873 from Pulaski County and Prairie County, and was named as a corruption of "lone oak", after a large red oak in the area that had been used by a surveyor to lay out the Memphis and Little Rock Railroad.

Located within Central Arkansas, the county's varied geography can be roughly broken into thirds horizontally. The top third has rolling hills at the edge of the Ozarks, including the Cabot area. The middle third, including the Lonoke area, contains portions of the Grand Prairie, a flat native grassland today known for rice farming, an important part of the culture, economy and history of Lonoke County. The southern third, including the Scott area, is home to the alluvial soils of the Arkansas Delta. Historically, a military road and a railroad brought settlers to the area, and cotton cultivation was very profitable. In 1904, a demonstration that rice could grow well on the same land coupled with sinking cotton prices drove the area into rice cultivation. During World War I, a United States Army World War I Flight Training airfield, Eberts Field, was constructed. 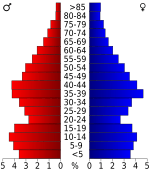 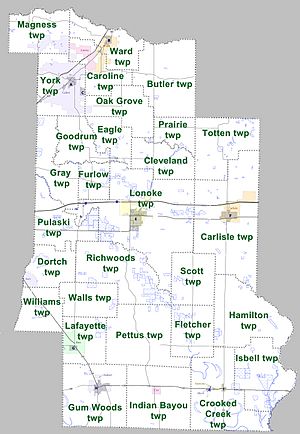 Townships in Lonoke County, Arkansas as of 2010

Townships in Arkansas are the divisions of a county. Each township includes unincorporated areas; some may have incorporated cities or towns within part of their boundaries. Arkansas townships have limited purposes in modern times. However, the United States Census does list Arkansas population based on townships (sometimes referred to as "county subdivisions" or "minor civil divisions"). Townships are also of value for historical purposes in terms of genealogical research. Each town or city is within one or more townships in an Arkansas county based on census maps and publications. The townships of Lonoke County are listed below; listed in parentheses are the cities, towns, and/or census-designated places that are fully or partially inside the township.

All content from Kiddle encyclopedia articles (including the article images and facts) can be freely used under Attribution-ShareAlike license, unless stated otherwise. Cite this article:
Lonoke County, Arkansas Facts for Kids. Kiddle Encyclopedia.