Scott is a census-designated place (CDP) in Lonoke and Pulaski counties in the central part of the U.S. state of Arkansas. The population was 72 at the 2010 census. It is part of the Little Rock–North Little Rock–Conway Metropolitan Statistical Area.

There were 40 households out of which 30.0% had children under the age of 18 living with them, 50.0% were married couples living together, 20.0% had a female householder with no husband present, and 27.5% were non-families. 20.0% of all households were made up of individuals and none had someone living alone who was 65 years of age or older. The average household size was 2.35 and the average family size was 2.76. 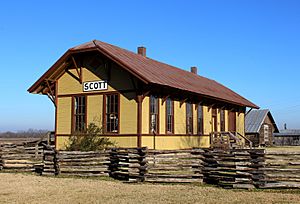 The Arkansas Department of Parks & Tourism operates two facilities in the Scott area, one on the Pulaski County side and the other on the Lonoke County side, each with a focus on local history:

Additionally, the history of Scott can be found at four other sites around the community. Near the county line is the Scott Plantation Settlement, a grouping of relocated buildings, which includes the wooden Cotton Belt Railroad Depot that served Scott, representing an example of a plantation-era community (much in the same fashion as Little Rock's Historic Arkansas Museum). Cotham's Mercantile Store, a widely known community restaurant favored by former President Bill Clinton, is housed in a former general store building constructed in 1917, and still displays multiple antique farm implements. Marlsgate, the area's best known example of a plantation family home, was constructed by the Dortch family early in the 20th century and is a popular site for weddings and receptions today. The Chapel of All Souls Church Interdenominational is an architectural gem from the turn of the twentieth century, is listed on the National Register of Historic Places, and has been in continuous use by the church since 1906.

All content from Kiddle encyclopedia articles (including the article images and facts) can be freely used under Attribution-ShareAlike license, unless stated otherwise. Cite this article:
Scott, Arkansas Facts for Kids. Kiddle Encyclopedia.