Pulaski County is a county in the U.S. state of Arkansas with a population of 392,664, making it the most populous county in Arkansas. Its county seat is Little Rock, which is also Arkansas's capital and largest city. Pulaski County is Arkansas's fifth county, formed on December 15, 1818, alongside Clark and Hempstead counties. The county is named for Count Casimir Pulaski, a Polish volunteer who saved George Washington's life during the American Revolutionary War.

An 1863 American Civil War battle, the Battle of Bayou Fourche, occurred in Pulaski County. Pulaski County is also home to Willow Springs Water Park, which is one of the oldest waterparks in the nation, opening in 1928. 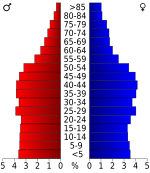 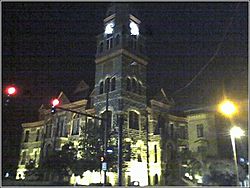 Evening at the original portion of the Pulaski County Courthouse, in downtown Little Rock.

Townships in Arkansas are the divisions of a county. Each township includes unincorporated areas and some may have incorporated towns or cities within part of their space. Townships have limited purposes in modern times. However, the US Census does list Arkansas population based on townships (often referred to as "minor civil divisions"). Townships are also of value for historical purposes in terms of genealogical research. Each town or city is within one or more townships in an Arkansas county based on census maps. Pulaski County only has two townships, as of 2010. They are listed below.

All content from Kiddle encyclopedia articles (including the article images and facts) can be freely used under Attribution-ShareAlike license, unless stated otherwise. Cite this article:
Pulaski County, Arkansas Facts for Kids. Kiddle Encyclopedia.