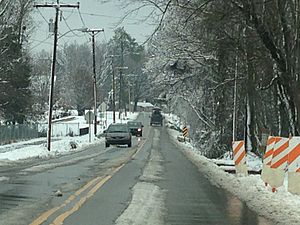 Mabelvale was a small, unincorporated train station town in southwestern Pulaski County, Arkansas, until being annexed into Little Rock in the late 1970s or early 1980s. The area today is part of Little Rock's seventh ward, while retaining a separate postal designation and ZIP code from most of the rest of the city. The neighborhood is currently represented on Little Rock's City Board of Directors by Brenda "B.J." Wyrick. [1]

The neighborhood is generally defined as the homes and businesses in the immediate area surrounding the intersection of Mabelvale Main Street and the Union Pacific railroad line. Its location on the south-central fringe of Little Rock proper — as well as proximity to unincorporated communities, neighborhoods in Southwest Little Rock and adjoining towns such as Shannon Hills which share the ZIP code — often leads to varying definitions of Mabelvale's boundaries.

Three Little Rock School District campuses are located around the neighborhood, providing education from pre-kindergarten through the eighth grade. Mabelvale Elementary is located on Mabelvale Cut Off, across the street from Morehart Park, and has served the area since opening in 1980. Across the neighborhood is Mabelvale Magnet Middle School on Mabelvale West Road near the post office. The middle school first opened in 1952, and joined the Little Rock district in 1987 to serve a large portion of southern neighborhoods throughout the city. Also in the area is Chicot Elementary, which serves students in pre-kindergarten through fifth grade.

Mabelvale also covers more than one county going into Saline; nearly everywhere in this area that is not covered by a city is called Mabelvale.

Vedanta Society of Arkansas has a temple in Mabelvale.

All content from Kiddle encyclopedia articles (including the article images and facts) can be freely used under Attribution-ShareAlike license, unless stated otherwise. Cite this article:
Mabelvale Facts for Kids. Kiddle Encyclopedia.