Grant County is a county in the U.S. state of Arkansas. Its population was 17,853 at the 2010 United States Census. The county seat is Sheridan.

Formed on February 4, 1869, Grant County is named for former U.S. President Ulysses S. Grant. It is an alcohol prohibition or dry county.

Robert W. Glover, a Missionary Baptist pastor who served in both houses of the Arkansas Legislature (1905-1912) from Sheridan, introduced in 1909 the resolution calling for the establishment of four state agricultural colleges. His brother, David Delano Glover, a Methodist, was a state representative in the 1907 session and a member of the United States House of Representatives from 1929 to 1935, having been unseated in 1934 by Grant County native John Little McClellan who at the time was practicing law in Camden. McClellan later went on to become Arkansas's longest serving U.S. senator. 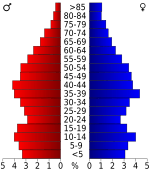 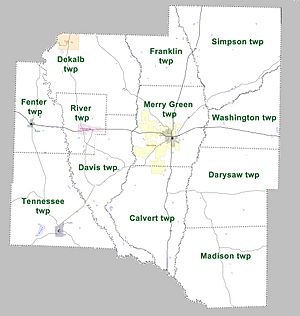 Townships in Grant County, Arkansas as of 2010

Townships in Arkansas are the divisions of a county. Each township includes unincorporated areas; some may have incorporated cities or towns within part of their boundaries. Arkansas townships have limited purposes in modern times. However, the United States Census does list Arkansas population based on townships (sometimes referred to as "county subdivisions" or "minor civil divisions"). Townships are also of value for historical purposes in terms of genealogical research. Each town or city is within one or more townships in an Arkansas county based on census maps and publications. The townships of Grant County are listed below; listed in parentheses are the cities, towns, and/or census-designated places that are fully or partially inside the township.

All content from Kiddle encyclopedia articles (including the article images and facts) can be freely used under Attribution-ShareAlike license, unless stated otherwise. Cite this article:
Grant County, Arkansas Facts for Kids. Kiddle Encyclopedia.