Sheridan is a city and county seat of Grant County, Arkansas, United States. The community is located deep in the forests of the Arkansas Timberlands. It sits at the intersection of US Highways 167 and 270. Early settlers were drawn to the area by the native timber, which is still a very important part of Sheridan's economy, although the city has diversified into several other industries. Sheridan's history also includes a college, Missionary Baptist College, until its closure in 1934, and a series of conflicts during the Civil Rights Movement. Located at the southern end of the Central Arkansas region, Sheridan has been experiencing a population boom in recent years, as indicated by a 49% growth in population between the 1990 and 2010 censuses. The population as of the 2010 census was 4,603.

Sheridan was named after Union general Phillip Sheridan during the Reconstruction Era.

Settlement through the Gilded Age

At the beginning of the 20th century, a railroad passed through Sheridan south into Dallas County. The railroad, owned by E. S. McCarty, carried freight and passengers for hire.

From 1917 to 1934, Missionary Baptist College operated in Sheridan. The college suffered from financial troubles due to the Great Depression. The college provided local residents with courses, not only in theology, but in Latin, Greek, physiology, ecclesiology, and expression. A 1920 bulletin issued by the college wrote that its goal was "to teach and emphasize the very principles for which the real Baptists of Arkansas stand and for which true Baptists have stood for almost nineteen centuries . . . this is no preacher manufacturing establishment [that] the Lord alone has the prerogative of calling men to preach the gospel." The revamped Missionary Baptist Seminary thereafter opened in Little Rock.

In 1943, Jewell Williams, a Jehovah's Witness, was convicted in the Mayor's Court for selling Bibles without a permit under Sheridan City Ord. No. 50. and fined $10. On a trial de novo, he obtained the same result. Williams joined other members of his faith and appealed similar convictions occurring across the state to the Arkansas Supreme Court in Berry v. City of Hope, challenging the city ordinance as unconstitutional under the First Amendment. The court agreed and held the ordinances unconstitutional.

The "Mighty 1090" KAAY radio station sponsored the Rebel Springs Rock Festival of 1973 5 miles (8 km) east of Sheridan on Highway 270 that included ZZ Top as a headliner. Tickets were $4 before the show and lasted three days, July 4–6, 1973. The National Guard was sent out to maintain "peace". Local property owners attempted to get a court-ordered injunction to halt the festival from talking place, on the legal theory of nuisance, but to no avail. 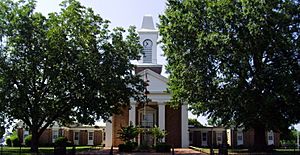 As the seat of county government, Sheridan is home to the Grant County Courthouse.

Sheridan hosts an annual event based on the area's deep roots in the timber industry called Timberfest, which includes a lumberjack competition and live music around the courthouse square. The White River Kid, starring Antonio Banderas and Randy Travis, was filmed during a mock Timberfest during the summer of 1998, with many of the local residents appearing as extras. 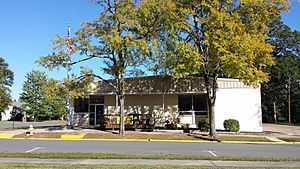 The Grant County Museum, located on Shackleford Road in Sheridan, preserves and interprets the history and culture of the county for residents and visitors. The museum features exhibits detailing the Battle of Jenkins' Ferry, a segment of the Union's failed Red River Campaign during the Civil War, as well as a large World War II vehicle collection. Other exhibits include pioneer life and settlement in Grant County, and the flora and fauna native to the county. The Heritage Square is also on the museum grounds, featuring ten relocated and restored buildings. Just 5.8 miles north of Sheridan is the B-17 Crash Memorial where a replica B-17 was constructed to honor nine airmen who died in a plane crash at this location in 1943. 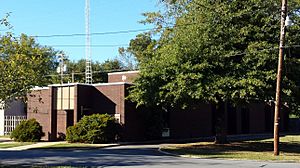 Sheridan's water system began when a private entity began installing water lines in the 1930s. This system was eventually purchased by the city, which now allows the Sheridan Water and Sewer Department to operate the system independently of city funds. Today, Sheridan is capable of treating groundwater obtained from five wells at a rate of 4.5 million gallons (17 million liters) per day (MGD/MLD). Sheridan's wastewater treatment facility is located at the end of Gatzke Drive and discharges treated effluent to Big Creek in accordance with the permit granted by the Arkansas Department of Environmental Quality. The facility utilizes a three-cell pond stabilization system followed by a holding pond and is designed for a flow of 0.67 MGD (2.5 MLD). 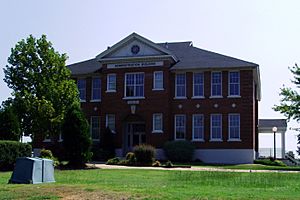 Sheridan had a segregated school for African-Americans until the Brown v. Board decision. At the time, Sheridan had around 199 African American residents out of the town's total population of 1,898. On May 21, 1954, the local school board voted unanimously to integrate its 21 African-American students into its high school to avoid the $4,000 it would have cost the school board to send them to Jefferson County. The white parents became upset and called another vote the next night. At that vote, the board voted unanimously to keep the local school segregated. Community members in the area, still not happy, petitioned and forced four school board members to step down.

Next, Jack Williams, the largest employer of African-Americans in the area, told Black families that they could accept his offer to buyout their homes and move them, or he would burn their houses down. After the departure of the last African-American student from the city limits, the city bulldozed the African-American school; the remnants of the school were buried and the city no longer had a duty to integrate their schools. This incident is recounted by former resident James Seawood on storycorps.

In March 2014, Sheridan High School principal Rodney Williams ordered the removal of student profiles from the student yearbook, rather than publish one of an openly gay student. In response, a human rights organization held a rally on the State Capitol steps, and the principal received a petition with 30,000 signatures asking Williams to reverse the decision.

All content from Kiddle encyclopedia articles (including the article images and facts) can be freely used under Attribution-ShareAlike license, unless stated otherwise. Cite this article:
Sheridan, Arkansas Facts for Kids. Kiddle Encyclopedia.