The largest commercial airport in Arkansas, it served more than 2.1 million passengers in the year spanning from March 2009 through to February 2010. While Clinton National Airport does not have direct international passenger flights, more than 50 flights arrive or depart at Little Rock each day, with nonstop service to 14 cities. The airport is included in the Federal Aviation Administration (FAA) National Plan of Integrated Airport Systems for 2019–2023, in which it is categorized as a small-hub primary commercial service facility.

Adams Field was named after Captain George Geyer Adams, 154th Observation Squadron, Arkansas National Guard, who was killed in the line of duty on September 4, 1937. He was a strong advocate for the airport, and also a Little Rock city councilor.

American Airlines was the first airline to serve Little Rock when it first landed at Adams Field in June 1931.

During World War II the airfield was used by the United States Army Air Forces Third Air Force for antisubmarine patrols and training.

In 1972 the airport opened its current 12-gate terminal.

On June 1, 1999 American Airlines Flight 1420 crashed upon landing at Little Rock National Airport on a flight from Dallas/Fort Worth International Airport, killing the captain and 10 passengers.

In August 2008 the airport approved a plan to renovate the terminal over a 15-year period. The plan would expand the terminal from 12 to 16 gates.

On March 20, 2012 the Little Rock Municipal Airport Commission voted to rename the airport the Bill and Hillary Clinton National Airport, after former Governor of Arkansas and President of the United States Bill Clinton and his wife, United States Secretary of State Hillary Clinton. The name Adams Field will continue to be used when referring to the airport's runways and air traffic and will be the airport's official designator.

In October 2013, Travel + Leisure released a survey of travelers that ranked Clinton National Airport as the worst of the 67 domestic airports considered in the survey. The survey report cited long lines and few food and shopping choices, among other criticisms. Subsequent surveys contradict Travel + Leisure's claim finding that more than 90 percent of passengers were satisfied with their experience.

The airport, from an approach road 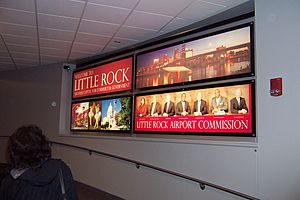 The single terminal has 12 gates. Six gates are along the length of the terminal (three on either side) and a rotunda at the end has six more.

All content from Kiddle encyclopedia articles (including the article images and facts) can be freely used under Attribution-ShareAlike license, unless stated otherwise. Cite this article:
Clinton National Airport Facts for Kids. Kiddle Encyclopedia.