Cleveland County (formerly Dorsey County) is a county located in the U.S. state of Arkansas. Its population was 8,689 at the 2010 U.S. census. The county seat is Rison.

The Arkansas legislature established Dorsey County as Arkansas's 71st county on April 17, 1873, naming it for Stephen W. Dorsey, the U.S. Senator from Arkansas. When he was indicted for defrauding the Post Office, they renamed it on March 5, 1885, for Grover Cleveland, the newly elected President of the United States.

The Battle of Mark's Mills, the pivotal engagement in the Union Army's ill-fated Camden Expedition during the U.S. Civil War, took place in what is now Cleveland County. This engagement resulted in a crushing victory for Confederate forces, though the victory ultimately proved to be hollow when Federal General Frederick Steele and the rest of his army managed to escape from Camden to Little Rock. 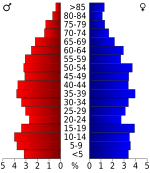 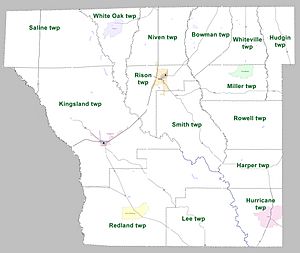 Townships in Cleveland County, Arkansas as of 2010

Townships in Arkansas are the divisions of a county. Each township includes unincorporated areas; some may have incorporated cities or towns within part of their boundaries. Arkansas townships have limited purposes in modern times. However, the United States Census does list Arkansas population based on townships (sometimes referred to as "county subdivisions" or "minor civil divisions"). Townships are also of value for historical purposes in terms of genealogical research. Each town or city is within one or more townships in an Arkansas county based on census maps and publications. The townships of Cleveland County are listed below; listed in parentheses are the cities, towns, and/or census-designated places that are fully or partially inside the township.

All content from Kiddle encyclopedia articles (including the article images and facts) can be freely used under Attribution-ShareAlike license, unless stated otherwise. Cite this article:
Cleveland County, Arkansas Facts for Kids. Kiddle Encyclopedia.