Kids Encyclopedia Facts
Not to be confused with Bradley, Arkansas.

Bradley County is a county located in the U.S. state of Arkansas. As of the 2010 census, the population was 11,508. The county seat is Warren. It is Arkansas's 43rd county, formed on December 18, 1840, and named for Captain Hugh Bradley, who fought in the War of 1812. It is an alcohol prohibition or dry county, and is the home of the world-famous Bradley County Pink Tomato Festival.

Indigenous peoples of various cultures had lived along the rivers of Arkansas for thousands of years and created complex societies. Mississippian culture peoples built massive earthwork mounds along the Ouachita River beginning about 1000 CE.

The Felsenthal refuge at the south end of Bradley County contains over 200 native American achaeological sites, primarily from the Caddo tribe that lived in the area as long as 5,000 years ago. These sites include the remains of seasonal fishing camps, ceremonial plazas, temple mounds and large villages containing as many as 200 structures.

After Hernando de Soto's exploration of the Mississippi Valley during the 1540s, there is little evidence of any European activity in the Ouachita River valley until the latter 17th century.

Louis XIV's long reign and wars had nearly bankrupted the French monarchy. Rather than reduce spending, the Regency of Louis XV of France endorsed the monetary theories of John Law a Scottish financier. In 1716, Law was given a charter for the Banque Royale under which the national debt was assigned to the bank in return for extraordinary privileges. The key to the Banque Royale agreement was that the national debt would be paid from revenues derived from opening the Mississippi Valley. The Bank was tied to other ventures of Law—the Company of the West and the Companies of the Indies. All were known as the Mississippi Company. The Mississippi Company had a monopoly on trade and mineral wealth. The Company boomed on paper. Law was given the title Duc d'Arkansas. Bernard de la Harpe and his party left New Orleans in 1719 to explore the Red River. In 1721, he explored the Arkansas River. At the Yazoo settlements in Mississippi he was joined by Jean Benjamin who became the scientist for the expedition.

In 1718, there were only 700 people in Louisiana. The Mississippi Company arranged ships to move hundred (800) people landed in Louisiana on one day in 1718, doubling the population.

John Law encouraged Germans, particularly Germans of the Alsatian region who had recently fallen under French rule, and the Swiss to emigrate.

Alsace was transformed into a mosaic of Catholic and Protestant territories. Alsace was sold to France within the greater context of the Thirty Years' War (1618–1648). Beset by enemies and to gain a free hand in Hungary, the Habsburgs sold their Sundgau territory (mostly in Upper Alsace) to France in 1646, which had occupied it, for the sum of 1.2 million Thalers.

The Jesuit Charlevoix went from Canada to Louisiana. His letter said "these 9,000 Germans, who were raised in the Palatinate (Alsace part of France) were in Arkansas. The Germans left Arkansas en masse. They went to New Orleans and demanded passage to Europe. The Mississippi Company gave the Germans rich lands on the right bank of the Mississippi River about 25 miles above New Orleans. The area is now known as 'the German Coast'."

Sweden lost Swedish Livonia, Swedish Estonia and Ingria to Russia almost 100 years later, by the Capitulation of Estonia and Livonia in 1710 and the Treaty of Nystad in 1721. Charles Fred. D'Arensbourg emigrated to Louisiana in 1721 with thirty officers. They would rather move to Louisiana, instead living as Russians.

European interest in the region then came in three distinct waves. The French hunters, trappers, and traders appeared first and operated along the Ouachita River valley until the Natchez revolt of 1729, which frightened away any developers for a while. Next, in the 1740s and 1750s, French settlers meandered north from the Pointe Coupee Post in south French Louisiana and named many of bayous. These settlers returned south to Pointe Coupee before the Spaniards took possession of Louisiana in the late 1760s. The third wave of European settlers were actually descendants of the second wave, mostly true Louisiana Creoles born near the Point Coupee and Opelousas Posts. Additionally, a few Canadians came down the river from the Arkansas Post, and a few native French traders also operated along the river in the 1770s.

Prior to 1782, with the exception of occasional failed colonization schemes, the Europeans ignored the vast Ouachita Valley, which extended from the area around Hot Springs, Arkansas southward towards the Mississippi River in Louisiana. This changed with the 1779–1782 war between England and Spain. After their defeat at the Battle of Baton Rouge in 1779, the English yielded control of Natchez to the Spaniards, and this led to several years of fighting as the English settlers resisted Spanish rule over them. After the ultimate English defeat, many settlers fled to the Ouachita Valley region, creating the threat of English/American rebel activity in the Ouachita Valley region. This prompted the Spanish governor, Don Bernardo, the Comte de Galvez, to establish a strong buffer zone between the independent American states and the Spanish province of Louisiana. In 1781 Galvez created the “Poste d'Ouachita” and named Jean-Baptist Filhiol (also known as Don Juan Filhiol) as the commandant. Filhiol served in this capacity between 1782 and 1804, and through his service helped to keep a firm Spanish grip on activities in the region.

Filhiol, his new wife, and a few others arrived in the Ouachita country in April 1782. He traveled up the river, past present-day Union Parish, to the old trading post called “Ecore a Fabri” (now Camden). For various reasons, after a few years Filhiol decided not to build his headquarters there and took his group back down river to the "Prairie des Canots".

In 1801, Spanish Governor Don Juan Manuel de Salcedo took over for Governor Marquess of Casa Calvo, and the right to deposit goods from the United States was fully restored. Napoleon Bonaparte returned Louisiana to French control from Spain in 1800, under the Treaty of San Ildefonso (Louisiana had been a Spanish colony since 1762.) However, the treaty was kept secret, and Louisiana remained under Spanish control until a transfer of power to France on November 30, 1803, just three weeks before the cession to the United States.

James Monroe and Robert R. Livingston traveled to Paris to negotiate the purchase in 1802. Their interest was only in the port and its environs; they did not anticipate the much larger transfer of territory that would follow.

During the period 1837–1861, settlers arrived from Mississippi, Alabama, Tennessee, and Georgia. Prior to 1860, to reach the available farmland of northwestern Louisiana and southwestern Arkansas, settlers from the Gulf Coast states most often crossed the Mississippi River at Natchez, then came up the Ouachita River. 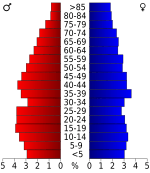 Townships in Arkansas are the divisions of a county. Each township includes unincorporated areas; some may have incorporated cities or towns within part of their boundaries. Arkansas townships have limited purposes in modern times. However, the United States Census does list Arkansas population based on townships (sometimes referred to as "county subdivisions" or "minor civil divisions"). Townships are also of value for historical purposes in terms of genealogical research. Each town or city is within one or more townships in an Arkansas county based on census maps and publications. The townships of Bradley County are listed below; listed in parentheses are the cities, towns, and/or census-designated places that are fully or partially inside the township.

All content from Kiddle encyclopedia articles (including the article images and facts) can be freely used under Attribution-ShareAlike license, unless stated otherwise. Cite this article:
Bradley County, Arkansas Facts for Kids. Kiddle Encyclopedia.