Drew County is a county located in the southeast region of the U.S. state of Arkansas. As of the 2010 census, the population was 18,509, making it the thirty-ninth most populous of Arkansas's seventy-five counties. The county seat and largest city is Monticello. Drew County was formed on November 26, 1846, and named for Thomas Drew, the 3rd governor of Arkansas.

Located on the edge of the Arkansas Timberlands and the Arkansas Delta, its fertile soils produced prosperity for early settlers in the antebellum era. Cotton was the major commodity crop, but corn, apples, peaches and tomatoes were also grown. Following the Civil War, the boundaries of Drew County changed.

In the late 19th and early 20th centuries, timber harvesting became an important industry. As a variety of industries began to move to the county, several colleges were founded in the county in the early part of the 20th century, one developing as University of Arkansas at Monticello. Today the county has a diverse economy and is an economic center in southeast Arkansas.

Loggy Bayou is a swamp in Drew County, not to be confused with a bayou of the same name in northwestern Louisiana. 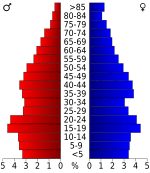 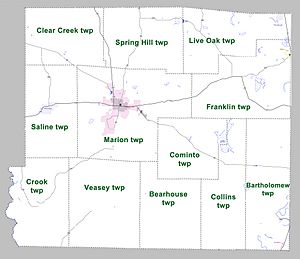 Townships in Drew County, Arkansas as of 2010

Townships in Arkansas are the divisions of a county. Each township includes unincorporated areas; some may have incorporated cities or towns within part of their boundaries. Arkansas townships have limited purposes in modern times. However, the United States Census does list Arkansas population based on townships (sometimes referred to as "county subdivisions" or "minor civil divisions"). Townships are also of value for historical purposes in terms of genealogical research. Each town or city is within one or more townships in an Arkansas county based on census maps and publications. The townships of Drew County are listed below; listed in parentheses are the cities, towns, and/or census-designated places that are fully or partially inside the township.

All content from Kiddle encyclopedia articles (including the article images and facts) can be freely used under Attribution-ShareAlike license, unless stated otherwise. Cite this article:
Drew County, Arkansas Facts for Kids. Kiddle Encyclopedia.