Ashley County is a rural South Arkansas county with a culture, economy, and history based on timber and agriculture. Created as Arkansas's 52nd county on November 30, 1848, Ashley County has seven incorporated municipalities, including Hamburg, the county seat and Crossett, the most populous city. The county is also the site of numerous unincorporated communities and ghost towns. The county is named for Chester Ashley, a prominent lawyer in the Arkansas Territory and U.S. senator from the state from 1844 to 1848.

The county is roughly divided into two halves by Bayou Bartholomew, with the rich, fertile, alluvial soils of the Arkansas Delta in the east, and the shortleaf pine forests of the Arkansas Timberlands in the west. The county contains six protected areas: Overflow National Wildlife Refuge, Felsenthal National Wildlife Refuge, three Wildlife Management Areas and the Crossett Experimental Forest. Other historical features such as log cabins, one-room school houses, community centers, and museums describe the history and culture of Ashley County.

Ashley County occupies 939.08 square miles (243,220 ha) and contained a population of 21,853 people in 8,765 households as of the 2010 Census, ranking it 6th in size and 34th in population among the state's 75 counties. The economy is largely based on agriculture and small manufacturing. Poverty and unemployment rates are above national averages, but steady. Household incomes are below state and national averages. Politically, Ashley County has transitioned from reliably Democratic to steadily Republican since the mid-20th century.

Ashley County is mostly served by two school districts, Hamburg School District and Crossett School District. Higher education is provided at University of Arkansas at Monticello College of Technology—Crossett, a public two-year community college in Crossett. Ashley County Medical Center in Crossett is a community hospital providing primary care in the county. Although no Interstate highways serve Ashley County, the county has access to three United States highways (U.S. Route 82 [US 82], US 165, and US 425) and eleven Arkansas state highways. Ashley County is also served by one public owned/public use general aviation airport, Z. M. Jack Stell Field, one electric cooperative (Ashley-Chicot Electric Cooperative), and ten community water systems provide potable water to customers in the county. It is an alcohol prohibition or dry county.

Ashley County, the fifth-largest county in Arkansas in terms of land area, was formed on November 30, 1848 from portions of Drew, Chicot and Union Counties. It was named after Chester Ashley, a US Senator and land speculator. The final borders were laid in 1861. The courtroom in the courthouse has a one-of-a-kind architecture: it is round, and the seats are arranged so that members of the audience can always see each other. 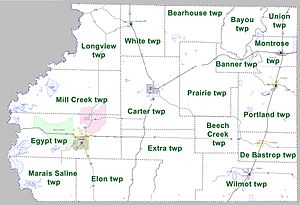 Townships in Ashley County, Arkansas as of 2010

Townships in Arkansas are the divisions of a county. Each township includes unincorporated areas; some may have incorporated cities or towns within part of their boundaries. Arkansas townships have limited purposes in modern times. However, the United States Census does list Arkansas population based on townships (sometimes referred to as "county subdivisions" or "minor civil divisions"). Townships are also of value for historical purposes in terms of genealogical research. Each town or city is within one or more townships in an Arkansas county based on census maps and publications. The townships of Ashley County are listed below; listed in parentheses are the cities, towns, and/or census-designated places that are fully or partially inside the township. 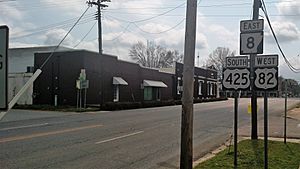 Ashley County is not served by any Interstate highways; the nearest access to the Interstate system is Interstate 20 (I-20) in Monroe, Louisiana. The county serves as a junction point for several US highways: US Highway 82 (US 82) crosses the county from west to east. This highway runs across South Arkansas, providing access to population centers including El Dorado, Magnolia, and Texarkana. The highway also has two special routes in Ashley County: a spur route to Felsenthal National Wildlife Refuge and business route in Montrose. US 165 and US 425 cross the county from south to north, both run south into Louisiana, with the former running north through the Arkansas Delta to North Little Rock and the latter providing northbound connections to Monticello and Pine Bluff.

The Ashley-Chicot Electric Cooperative, based in Hamburg, is a non-profit electric utility cooperative serving the rural areas of Ashley County with electric service, as well as parts of adjacent counties. Entergy Arkansas provides electricity for the cities of Hamburg and Crossett and nearby populated outlying areas, and to the small communities along US 165.

All content from Kiddle encyclopedia articles (including the article images and facts) can be freely used under Attribution-ShareAlike license, unless stated otherwise. Cite this article:
Ashley County, Arkansas Facts for Kids. Kiddle Encyclopedia.