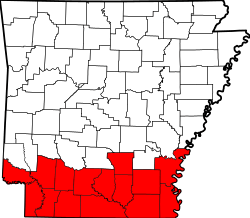 South Arkansas lies within the southern most portions of Arkansas Gulf Coastal Plain and Delta regions. It encompasses the lower 15 counties of the state.

Columbia and Union counties also stretch over one of the largest Brine reserves in the world. Bromine is derived from brine, or saltwater, and local companies play an international role in the commercialization of bromine and its many applications.

All content from Kiddle encyclopedia articles (including the article images and facts) can be freely used under Attribution-ShareAlike license, unless stated otherwise. Cite this article:
South Arkansas Facts for Kids. Kiddle Encyclopedia.