Hempstead County is a county located in the U.S. state of Arkansas. As of the 2010 census, the population was 22,609. The county seat is Hope. Hempstead County is Arkansas's fourth county, formed on December 15, 1818, alongside Clark and Pulaski counties. The county is named for Edward Hempstead, a delegate to the U.S. Congress from the Missouri Territory, which included present-day Arkansas at the time. It is an alcohol prohibition or dry county.

Historic Washington State Park is located in Hempstead County some nine miles northwest of Hope in the historic village of Washington, Arkansas. The state park opened in 1973 as "Old Washington Historic State Park", but the "Old" was dropped from the name in 2006. The park offers walking tours of the historic village, which contains more than a dozen historic structures from the 19th and early 20th centuries. 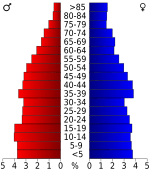 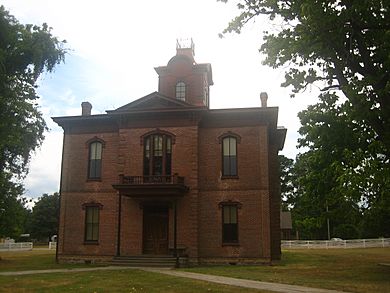 The 1874 Hempstead County Courthouse in the historic village of Washington is now the visitors center for Historic Washington State Park. 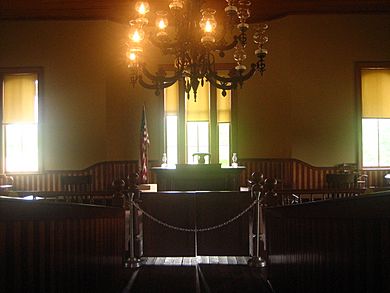 The upper floor courtroom in the former Hempstead County Courthouse in Washington, Arkansas

Townships in Arkansas are the divisions of a county. Each township includes unincorporated areas; some may have incorporated cities or towns within part of their boundaries. Arkansas townships have limited purposes in modern times. However, the United States Census does list Arkansas population based on townships (sometimes referred to as "county subdivisions" or "minor civil divisions"). Townships are also of value for historical purposes in terms of genealogical research. Each town or city is within one or more townships in an Arkansas county based on census maps and publications. The townships of Hempstead County are listed below; listed in parentheses are the cities, towns, and/or census-designated places that are fully or partially inside the township.

All content from Kiddle encyclopedia articles (including the article images and facts) can be freely used under Attribution-ShareAlike license, unless stated otherwise. Cite this article:
Hempstead County, Arkansas Facts for Kids. Kiddle Encyclopedia.