El Dorado, founded by Matthew Rainey, is a city in, and the county seat of, Union County, on the southern border of Arkansas, United States. According to the 2010 census, the population of the city is 18,884.

The city was the heart of the 1920s oil boom in the area. During World War II, it became a center of the chemical industry, which still plays a part in the economy, as do oil and timber. El Dorado is located approximately 120 miles (190 km) from the state capital of Little Rock.

The annual average precipitation at El Dorado is 54.11 inches. Rainfall is fairly evenly distributed throughout the year. The wettest month of the year is May with an average rainfall of 5.49 inches.

The city offers many outdoor activities and parks in all corners of the city for recreation including tennis courts, baseball and softball fields, golf courses, and walking trails. The city also contains a botanical state park.

The South Arkansas Arboretum is an arboretum and botanical garden owned by the local school system but operated as Arkansas's 50th state park by the South Arkansas Community College. It is located next to the old El Dorado High School on Timberlane street and is open daily except for holidays. Opened in 1965, the arboretum is Arkansas's only state park located within a city. It includes more than two miles (3 km) of paved trails.

Private golf course. The 18-hole "El Dorado" course at the El Dorado Golf & Country Club facility features 6,449 yards of golf from the longest tees for a par of 71. The course rating is 70.2 and it has a slope rating of 116. Designed by Herman Hackbarth, the El Dorado golf course opened in 1925.

Memorial Stadium is a fully equipped 6,000-seat football stadium and track, and home of the El Dorado Wildcats. After a major field and stadium renovation in 2010, the stadium features a synthetic turf field by Athletic Surfaces Plus and a video scoreboard. The stadium hosts sports events year round, most notably the Boomtown Classic, an annual college football match between in-state college football rivals.

El Dorado has been a regional center for the performing arts for many years. The South Arkansas Arts Center, or known locally as SAAC, is an independent community-supported nonprofit organization. The mission of the South Arkansas Arts Center in serving the people of the bi-state region is to promote, bridge, facilitate and support the ideas and forms of artistic appreciation, education, ability, confidence and cooperation for all age, cultural, social and racial groups. This 22,500-square-foot (2,090 m2) facility houses three visual art galleries, a ballet studio, a 207-seat theatre, educational classroom space, and an open studio for artists in the community.

SAAC presents a series of eight to twelve contemporary performance events each year on stage and hosts rotating art exhibitions each year of national, regional and local significance in the Merkle, Price, and Lobby art galleries. SAAC also rents its performance facilities to independent groups who present their own programs in the Callaway Theatre, a 207-seat auditorium with a 35-foot (11 m) prosceniums style stage. 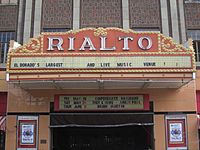 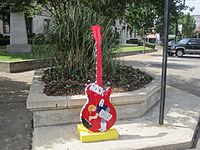 El Dorado honors rockabilly music with this downtown exhibit near the courthouse.

Built on the site of an earlier Rialto Theater (1921–1928), the Rialto Theater opened in 1929, with seating for 1,400, originally presenting both live stage shows in addition to films. The Rialto Theater closed in 1980, but was restored in 1987 and reopened once more showing movies, subdivided into 3-screens. The theater closed again in the early 2000s to be renovated into a music hall with performances given weekly by local and touring musical acts and shows.

The Rialto was added to the National Register of Historic Places in 1986. It has long been rumored to be haunted. Dozens of former employees have reported unexplained footsteps, strange apparitions and even the fleeting scent of a woman’s cologne in an upstairs bathroom. Many supernatural experts and network television teams have spent time at the Rialto.

The historic 1,830 seat El Dorado Municipal Auditorium is a multi-purpose auditorium facility with large lobby, grand hall seating, and multi-tiered sloping balcony. For more than 50 years, Municipal Auditorium has been the mainstay of many musical acts, entertainment shows, school productions, dance recitals and is home to the South Arkansas Symphony Orchestra.

Founded in 1956 as one of the first orchestras in Arkansas, a group of local music lovers formed the El Dorado Symphony and Choral Society. The purpose of the organization was to form a symphony orchestra which would provide an outlet for musicians in the community, especially students of unusual ability. Felix Spooner, string instructor in the local schools, was named the conductor. The first concert was performed in 1957 by a 30 piece orchestra to an audience of the same size. John Shenaut, violinist and conductor of the Shreveport Symphony was guest artist. Interest grew in the orchestra and its mission expanded to fulfill a regional role serving as the South Arkansas Symphony Orchestra.

El Dorado is the site for several annual events.

Beginning on the first Saturday in May, the Mayhaw Festival is hosted by the South Arkansas Historical Preservation Society. The official event name is Bugs Bands & Bikes. It coincides with a crawfish boil, a "Battle of the Bands", a bike show/one day motorcycle rally, a motorcycle parade, pool tournament, and other activities.

In September, the city hosts the SouthArk Outdoor Expo, with outdoor activities and events targeted to anglers, hunters, children, and families.

El Dorado also hosts winter holiday events, including the Festival of Lights and the "largest Christmas parade in Arkansas". 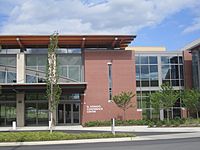 Built in 2010 and dedicated in 2011, this $14.4 million, 50,764-square-foot (4,716.1 m2) multi-purpose facility contains a large assembly hall with a capacity for 1,000 banquet style seating and theatre seating for up to 2,500. In addition to the main hall, there are 5 small meeting rooms that are capable of being joined together or separated by moveable walls to allow for many classroom, meeting or training arrangements. A full commercial kitchen facilitates catering and banquet dining. The building houses student services for South Arkansas Community College. This area includes a bookstore, café, meeting rooms, counseling, curriculum and financial advisement, training and testing rooms.

The Union County Courthouse was built from 1927 – 28 as a Greek revival by Mann & Stern architects of Little Rock. The original Union County Courthouse, built in 1844 at a cost of $200 stood where Larry's Rexall Drug Store is today. As the county seat, El Dorado quickly outgrew even its second courthouse (built on this site in 1848) in the 1920s due to the oil boom's voluminous deed and title transactions. Faceted in smooth-dressed limestone, the third and current courthouse boasts 40 freestanding ionic exterior columns spanning four stories, and a richly detailed marble two-story atrium with art deco accents. The exterior medallions of the scales of justice and lanterns of light signify the search for truth. The building's largest courtroom features a walnut wainscot, painting and scoring on textured plaster walls to resemble stone, and an ornately detailed plaster cast ceiling of gilded rosettes. Back when the square was flanked by log cabin structures there was a large duck pond on this site. Emigrants camped on its banks. Many pioneer citizens recorded incidents where deer and even bears came to drink – and hunters would frequently bag their dinner by shooting the wild ducks that lit there in the mid-1800. It was filled in under contract by Ben Mathews.

The public radio station is:

El Dorado is also the home of KAKV, 88.9 FM, an owned and operated affiliate of the K-LOVE radio network.

All three transmitters are located east of El Dorado, in Huttig, Arkansas. While KTVE no longer considers El Dorado their primary newsroom, the station is licensed to El Dorado by the FCC. The station moved primary operations to Monroe, Louisiana in 1988.

Over the air HD television programming is currently available for two of the four major networks:

K18AB-D is a translator station of KNOE, the CBS affiliate in Monroe, Louisiana. However, the translator broadcasts KNOE's full HD signal; a major service to the HD viewers in Union County who cannot receive KNOE's main digital signal broadcasting from Columbia, Louisiana; over 75 miles (121 km) away.

El Dorado is also served by stations broadcast from nearby Shreveport and Monroe, Louisiana:

According to the 2000 Census, 22.5% of the population age 25+ had an associate degree or higher. More than 400 teachers and administrators work to meet the needs of all students regardless of age, ability, or background. Approximately 50 percent of these teachers and administrators hold advanced degrees. More than 4,600 students attend the nine El Dorado public schools in the El Dorado School District #15. A new high school with a 1500-student capacity was completed in June 2011.

There are five elementary schools in the district, divided into academies (K-4) and 1 (K-6): 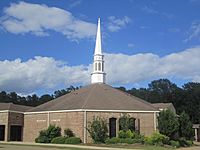 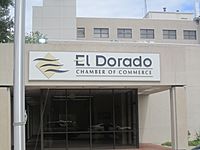 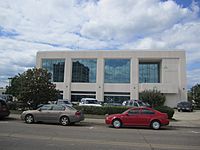 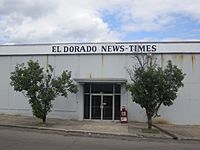 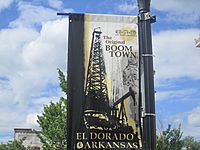 El Dorado has two airports, one commercial and a small general aviation airport, both of which are owned by the city. The South Arkansas Regional Airport at Goodwin Field offers mostly private aircraft, as well as commercial service via one airline carrier. El Dorado's second airport is located within the city limits and closer to the downtown area. The El Dorado Downtown Airport has flights in and out for local industries, including Fortune 500 oil and gas companies and those who own small private planes have the option to lease or own their own hangar.

The airport was previously serviced by SeaPort Airlines, but flights ceased following SeaPort's liquidation on 20 September 2016. The US Department of Transportation announced 9 December 2016 that a new EAS contract had been awarded to Southern Airways Express to fly 18 weekly round trip non stop flights to Dallas Fort Worth.

All content from Kiddle encyclopedia articles (including the article images and facts) can be freely used under Attribution-ShareAlike license, unless stated otherwise. Cite this article:
El Dorado, Arkansas Facts for Kids. Kiddle Encyclopedia.