Kids Encyclopedia Facts
This page is about the city of Camden in Arkansas. For other uses, see Camden.

Camden is a city in and the county seat of Ouachita County in the south-central part of the U.S. state of Arkansas. The city is located about 100 miles south of Little Rock. Situated on bluffs overlooking the Ouachita River, the city developed because of the river. The recorded history began in 1782 when a Spanish military post was established on the site of an old French trading post called Écore à Fabri. When Ouachita County was formed in 1842, American settlers changed the name to Camden. The city became an important port during the steamboat era when Camden became known as the “Queen City” of the Ouachita. In 1864, Camden became the unintended focus of the Red River Campaign, a major Civil War effort resulting in several significant battles.

In 2000, Camden had a population of 13,154, but it lost 7.4 percent of its residents and recorded 12,183 in 2010. Camden is the principal city of the Camden Micropolitan Statistical Area, which includes all of Ouachita and Calhoun counties.

Indigenous peoples of various cultures lived along the rivers of Arkansas for thousands of years and created complex societies. Mississippian culture peoples built massive earthwork mounds along the Ouachita River, beginning circa 1000.

The region was part of French Louisiana from 1682-1762. The Indians who had given their name to the river had died out or moved on by the mid-1700s. The land along the Ouachita River was inhabited by remnants of several Indian tribes, and the river was home to a small population of mostly French hunters, trappers and traders. Then, in 1763, Spain acquired Louisiana by treaty, but the culture remained decidedly French. After the American Revolution, Spanish Governor Bernardo de Gálvez decided to establish a military post on the upper Ouachita as a buffer between US and Spanish territory. He appointed a Frenchman named Jean-Baptiste Filhiol (Don Juan Filhiol) to be the commandant of the new post. In 1782, Filhiol chose an old, established center of trade called Ecore à Fabri (Fabri's Bluff) located high above the Ouachita River at present-day Camden. This was the first attempt at a European settlement on the Ouachita. The nomadic inhabitants had no interest in an agrarian lifestyle, and efforts to attract settlers from elsewhere failed. A few years later, Filhiol moved the Ouachita Post down the river to Prairie des Canots, now Monroe, Louisiana.

The Louisiana Purchase brought a wave of migrants from the southern United States. They developed farmlands as cotton plantations and transported thousands of enslaved African Americans into the area for labor. The city of Camden marks its founding as 1824, though it was not incorporated and officially named “Camden” until 1844. Some controversy exists over the origin of the name, but most agree it is named for Camden, Alabama, the hometown of General Thomas Woodward, an early city founder. Prior to the name change from Écore a Fabri to Camden, the location was simply known as "The Bluff".

Camden became the second largest city in Arkansas. In pre-Civil War days it was a mercantile center and a bustling river port served by frequent scheduled steamboats carrying passengers and freight. Most traveled between Camden and New Orleans, but some passengers also went upriver to St. Louis, Missouri. Camden was also headquarters for John T. Chidester's stagecoach line that served Arkansas, Louisiana and Texas. Chidester's company carried US mail from Memphis to Fort Smith for the Butterfield stage line.

During the American Civil War, Camden was occupied for twelve days in April 1864 by Union soldiers as part of the Union army's ill-fated Red River Campaign. The only warfare the city saw was a skirmish in which Confederates fired on the Union troops occupying Fort Southerland, so many antebellum homes escaped harm. Unable to supply his army after the Confederates won the Battle of Poison Springs, General Steele withdrew from the city on April 26.

Before the steamboat era faded, Camden had become a railroad town—served by the mainline of the St Louis-Southwestern Railroad (Cotton Belt) and by branch lines of the Missouri Pacific and the Rock Island railroads. The town remained an important cotton shipping depot through the early decades of the twentieth century. A major economic infusion accompanied the South Arkansas oil boom of the 1920s. In 1927, the International Paper Company built a processing mill at Camden, following development of south Arkansas' lumber industry.

For several decades, Camden was the headquarters of the Clyde E. Palmer newspaper chain, which included The Camden News, the Texarkana Gazette, the Hot Springs Sentinel-Record, and the Magnolia Banner News. The daily newspaper in Camden is the original flagship publication of WEHCO Media.

Near the end of World War II, thousands of new jobs were created with the 1944 construction of a naval ammunition depot across the Ouachita at Shumaker. The Korean War brought a resurgence of jobs and activity at the depot, which closed following the Korean War. The city and county redeveloped its facilities and grounds into an extensive industrial area. This was the site of some major defense establishments and multiple smaller industries. A technical campus of Southern Arkansas University is also located there.

In the 1990s, post Cold-War downsizing of the defense industry brought severe job losses—and resulting population decline—to the Camden area. This was followed by the closing of the International Paper Company mill a few years later. In recent years, however, a partial resurgence of defense contracts and a diversified mixture of small business and professional activity have stabilized the town's economy.

As one of Arkansas' most historic towns, the city attracts considerable heritage tourism. Camden is home to two major events: the Daffodil Festival in the spring and the BPW Barn Sale in the fall.

Among the many historic homes in Camden is the Richie-Crawford House at 330 Clifton Street built in 1909 and featuring four Corinthian columns and a two-story porch. On March 2, 1957, the Camden attorney Maud Robinson Crawford (born 1891) disappeared from the house that she shared with her husband, Clyde Falwell Crawford (1894–1969). Her disappearance remains officially unsolved.

Camden is located on the Ouachita River, at the end of the navigable part of the river.

The climate in this area is characterized by hot, humid summers and generally mild to cool winters. According to the Köppen Climate Classification system, Camden has a humid subtropical climate, abbreviated "Cfa" on climate maps. 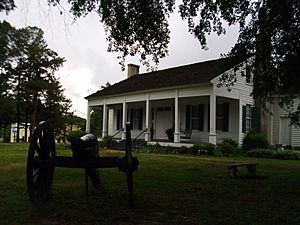 Attractions in town include the McCollum-Chidester House, home to the Ouachita County Historical Society,. Built in 1847 by local merchant Peter McCollum, the house was purchased by John T. Chidester in 1857 and was used as a way station on his stage line. It was featured in the television series North and South.

Camden has numerous historic buildings. There are two National Register districts. The Clifton and Greening Streets Historic District was created in 1997, and the Washington Street Historic District in 2010. The old Camden Post Office, built 1895, was added to the register in 1977. It is now a popular restaurant. The oldest continually running restaurant in the state of Arkansas is also located in Camden. The White House Cafe was opened in 1907 by Hristos Hodjopulas.

About 10 miles (16 km) to the northwest, the site of the Battle of Poison Springs is preserved at Poison Springs Battleground State Park, one of three state parks commemorating the campaign. Oakland Cemetery, which is on the National Register of Historic Places, is the largest Confederate cemetery in the area. Artifacts related to two famous Camden products, Camark pottery and Grapette soft drinks, as well as Civil War and railroad relics, are exhibited at the Camden Visitors Center and Museum. Two major events held in the city are the spring Camden Daffodil Festival and autumn BPW Barn Sale. Other area attractions include White Oak Lake State Park; the Arkansas Museum of Natural Resources at Smackover, and El Dorado.

Camden was once served by Camden School District and Fairview School District. In 1990 the two districts merged. Public education for early childhood, elementary and secondary education is available from the following school districts:

All content from Kiddle encyclopedia articles (including the article images and facts) can be freely used under Attribution-ShareAlike license, unless stated otherwise. Cite this article:
Camden, Arkansas Facts for Kids. Kiddle Encyclopedia.