Monroe (historically French: Poste-du-Ouachita) is the eighth-largest city in the U.S. state of Louisiana. it is the parish seat of Ouachita Parish. In the official 2010 census, Monroe had a population of 48,815. The municipal population declined by 8.1 percent over the past decade; it was 53,107 in the 2000 census. After a recheck in 2012, the Census Bureau changed the 2010 population from 48,815 to 49,147. Mayor Jamie Mayo, however, maintains that the Monroe population is more than 50,000 and indicated that he will pursue a continued challenge to the count.

Monroe and the neighboring city of West Monroe (pop. 13,250), located just across the Ouachita River, are often referred to as the Twin Cities of northeast Louisiana. 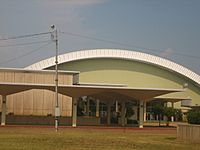 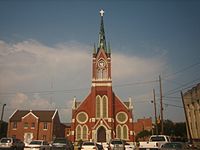 The settlement formerly known as Fort Miro adopted the name Monroe, during the first half of the 19th century, in recognition of the steam-powered paddle-wheeler James Monroe. The arrival of the ship had a profound effect on the settlers; it was the single event, in the minds of local residents, that transformed the outpost into a town. The ship is depicted in a mural at the main branch of the Monroe Library on North 18th Street. Therefore, credit is indirectly given to James Monroe of Virginia, the fifth President of the United States, for whom the ship was named.

During the American Civil War, Monroe and Opelousas, the seat of St. Landry Parish in south Louisiana, had Confederate training camps. They were established after the fall of New Orleans to the Union in 1862. Conscripts were soon sent to both camps.

In 1862, Monroe and Delhi in Richland Parish became overcrowded with unwelcome refugees from rural areas to the east. They had fled the forces of Union General U.S. Grant, who moved into northeastern Louisiana and spent the winter of 1862–1863 at Winter Quarters south of Newellton in Tensas Parish. He was preparing for the siege of Vicksburg, Mississippi, not completed until July 4, 1863. Historian John D. Winters reported "strong Union sympathy" in both Delhi and Monroe. As the refugees moved farther west toward Minden in Webster Parish, many of the residents, themselves very poor, refused to sell them food or shelter and treated them with contempt.

Union boats came up the Ouachita River to Monroe to trade coffee, liquor, dry goods, and money for cotton. "Confederate officers were accused by a citizen of encouraging the trade and of fraternizing with the enemy, eating their oysters, and drinking their liquor." As the war continued, deserters and stragglers about Monroe became "so plentiful that the Union Army sent a special detachment" from Alexandria to apprehend them.

In 1913, Joseph A. Biedenharn, the first bottler of Coca-Cola, moved to Monroe from Vicksburg, Mississippi. Until Biedenharn's breakthrough, Coca-Cola had been available only when individually mixed at the soda fountain. Biedenharn and his son, Malcolm Biedenharn, were among the founders of Delta Air Lines, originally Delta Dusters. His home and gardens at 2006 Riverside Drive in Monroe have been preserved and are now operated as the Biedenharn Museum and Gardens and are open to the public.

Collett E. Woolman, the Ouachita Parish agent, was originally from Indiana. He pioneered crop dusting to eradicate the boll weevil, which destroyed cotton throughout the Mississippi River delta country in the early 20th century. Woolman originated the first crop-dusting service in the world.

The collapse of cotton production contributed to the Great Migration of the early 20th century, when a total of 1.5 million African Americans left the rural South for jobs in northern and midwestern cities. They were also escaping the oppressive racial conditions and violence under Jim Crow and the disenfranchisement that excluded most blacks from the political system.

Howard D. Griffin (1911-1986) purchased a boat dealership in 1936 while he was a student at what became the University of Louisiana at Monroe. By the 1960s, Griffin's company had become the largest outboard motor dealership in the world. He also sold motorcycles. From 1965 to 1985, Griffin and his wife, Birdie M. Griffin (1915-1985), operated their seasonal Land O' Toys store on South Grand Street in Monroe. The motto was "Land O’ Toys; Loads of fun for girls and boys; Bring the kids and look around; The biggest toy deal in the town." Once Christmas was over, the toy store was quickly phased out, and the outboard motors returned to the showroom. From her childhood memories, Sherry Lynn Mason recalls the Land O' Toys: "I loved that store. Every time [my father] took me there, we were waiting for his outboard motor to be fixed across the street. It was a magical place to me!” Amy Berry Baker recalls, "It wasn't Christmas until we went to Howard Griffin ... magical for kids," according to an article in The Monroe News-Star. Mrs. Griffin died December 15, 1985, and the store close permanently a few days after Christmas of that year. In March 2011, the remaining abandoned building burned. All that remains are the memories of the former customers, now all adults. Cheri Chadduck recalled, "Memories are completely magical, and I am so grateful for my childhood recollections of time there." 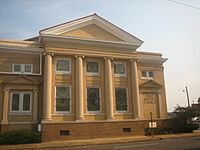 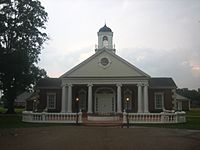 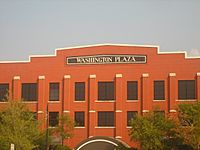 Regional cities and their distance from Monroe include:

Monroe has a humid subtropical climate (Köppen climate classification Cfa). Rainfall is abundant, with the normal annual precipitation averaging over 51 inches (1.3 m), with monthly averages ranging from less than 3 inches (76 mm) in August to more than 5 inches (130 mm) in June. Severe thunderstorms with heavy rain, hail, damaging winds and tornadoes occur in the area during the spring and summer months. The winter months are normally mild, with an average of 35 days of freezing or below-freezing temperatures per year, with ice and sleet storms possible. Summer months are hot and humid, with maximum temperatures exceeding 90 degrees an average of 91 days per year, with high to very high relative average humidity, sometimes exceeding the 90 percent level.

Southern Monroe (south of U.S. Highway 80) This area contains the Pecanland Mall and the Louisiana Purchase Gardens and Zoo.

North and East Monroe Metro Area (north of U.S. Highway 80) The University of Louisiana at Monroe and the headquarters for CenturyLink can be found in this area. This list includes communities located outside Monroe City limits. 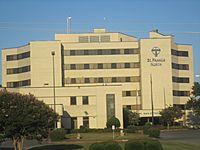 Monroe was the headquarters of Delta Air Lines during the second half of the 1920s. As it expanded, it moved to Atlanta.

Monroe Regional Airport serves the city. The airport has three main runways and is served by American Airlines, United Airlines and Delta Air Lines. Greyhound Bus Lines provides transportation from Monroe to many cities across the nation.

The city of Monroe has the oldest municipally owned transit system in the nation. Created in 1906 as a four-line street railroad, the Monroe Transit System now provides 13 fixed bus routes covering most areas of the city, and three demand-response buses serving the disabled. Monroe can be accessed from I-20, U.S. Highway 165, Louisiana Highway 15, U.S. Highway 80, and I-420 (proposed). the main railroads: Kansas City Southern (kcs), Union Pacific BNSF and Norfolk Southern (NS), serve freight traffic.

Monroe is home to the 528th Engineer Battalion of the Louisiana Army National Guard. This unit is part of the 225th Engineer Brigade which is headquartered in Pineville, Louisiana at Camp Beauregard.

All content from Kiddle encyclopedia articles (including the article images and facts) can be freely used under Attribution-ShareAlike license, unless stated otherwise. Cite this article:
Monroe, Louisiana Facts for Kids. Kiddle Encyclopedia.