Ashdown (formerly Turkey Flats and Keller) is a city in Little River County, Arkansas, United States. The community was incorporated in 1892 and has been the county seat since 1906. Located within the Arkansas Timberlands between the Little River and the Red River, Ashdown's economy and development have historically been tied to the timber industry, a trend that continues to this day. Ashdown's population at the 2010 census was 4,723, a slight decrease from the 2000 census. The city's well-preserved history and proximity to outdoor recreation such as Millwood State Park draws tourists to the area. Although not within the Texarkana metropolitan area, the city's proximity to Texarkana impacts many areas of life in Ashdown.

Founded as a small farming community, Ashdown was initially known as Turkey Flats and later Keller before being renamed by Judge Lawrence Alexander Byrne. Following his Keller mill being "burned down to ashes", Byrne vowed to rebuild and found a town named Ashdown. It was incorporated on June 11, 1892 as Ashdown, and rapid growth began in 1895 following the railroad reaching town. The Arkansas and Choctaw Railroad connected Ashdown to Arkinda, and the growth of the Kansas City Southern Railway, the Frisco and the Memphis, Dallas and Gulf Railroad continued to grow the city and her timber industry, which had been utilizing steamboats and flatboats to ship lumber.

Downtown Ashdown hosts an annual Whistlestop Festival in May, paying homage to the importance of the railroad to the city's development. Festivities include an art show, catfish cookoff, car show, food vendors, games/activities for children, turtle races and the crowning of Miss Whistlestop. A farmer's market is hosted in City Park every Tuesday, Thursday and Saturday during the growing season. 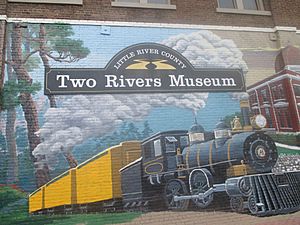 Downtown Ashdown has historically been the economic, social and political hub of Little River County. Today, it is preserved by the National Register of Historic Places (NRHP) as the Ashdown Commercial Historic District. Roughly bounded by Keller, E. Main, Commerce, and N. Constitution streets, the district encompasses 32 contributing properties deemed instrumental in Ashdown's farming and timber industries in the early 20th century. The nearby Memphis, Paris and Gulf Railroad Depot also is listed on the NRHP due to the strong tie between the success of the railroad and the Ashdown economy.

The Hunter-Coulter Museum at 310 N. 2nd Street is managed by the Little River County Historical Society. Originally built in 1918 to house a business following the railroad-inspired boom, it is one of the few remaining structures from the boom period of Ashdown's history. Today, it features period furnishings and offers a candlelight dinner around Christmas. The Two Rivers Museum at 15 E. Main Street contains a military display, "Freedom's Heroes", including World War I and World War II uniforms. A horse-drawn hearse and embalming table are also among the displays. A display honoring Henry Kaufman, founder of Kaufman Seeds, is also available to visitors. 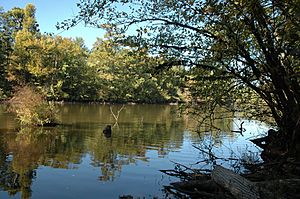 Outdoor recreation is plentiful in Ashdown. City Park features a walking trail, playground, tennis courts, baseball and softball diamonds and horseshoe pits. It is also host to the city's farmer's market. Northeast of town, Lake Millwood offers visitors boating, fishing, camping and hiking opportunities along its shores. Along the lake, Millwood State Park is well known for birding and trophy fishing. The park also offers camping, picnic sites, trails and a marina for visitors. Golf is also available near the lake on the 18-hole golf course at the Millwood Landing Golf and RV Resort. Nearby Beard's Bluff offers camping, hiking, fishing and boating. The Pond Creek National Wildlife Refuge at the intersection of the Mississippi flyway and Central Flyway offers 30,000 acres (12,000 ha) of seasonally flooded hardwood forested wetlands that attract wintering waterfowl and deer. Seasonal hunting is offered, as well as fishing, camping and photography.

Students in the Ashdown School District graduate from Ashdown High School. Postsecondary education in Ashdown is available at a local branch of the Cossatot Community College of the University of Arkansas System.

All content from Kiddle encyclopedia articles (including the article images and facts) can be freely used under Attribution-ShareAlike license, unless stated otherwise. Cite this article:
Ashdown, Arkansas Facts for Kids. Kiddle Encyclopedia.