Jefferson County, Arkansas is a county located in the U.S. state of Arkansas in the area known as the Arkansas Delta, that extends west of the Mississippi River. As of the 2010 census, the population was 77,435. Its county seat and largest city is Pine Bluff. Jefferson County is Arkansas's 21st county, formed on November 2, 1829, from portions of Arkansas and Pulaski counties, and named for Thomas Jefferson, third President of the United States. Jefferson County is included in the Pine Bluff, Arkansas Metropolitan Statistical Area. The county is bisected by the Arkansas River, which was critical to its development and long the chief transportation byway.

The area that would later become Jefferson County was occupied by the Quapaw when French explorers established the Arkansas Post in the 17th century; the foreigners claimed this area as Louisiana, part of New France.

In March 1819, Robert Crittenden was appointed secretary of Arkansas Territory. That same year, Joseph Bonne, traveling upstream on the Arkansas River from Arkansas Post, built a cabin on a “high bluff covered with pine trees” on the river’s south bank. Several years later, James Scull, also from Arkansas Post, established a tavern and small inn on the river's north bank, across from what would become the site of Pine Bluff.

Five years later, Crittenden convinced the remaining Quapaw to sign the November 15, 1824 treaty relinquishing what remained of their tribal lands. Steamboat travel led to expanding settlement, "bringing to the area such men as French-born Napoleonic soldier Antoine Barraque (Pine Bluff’s principal east-west street was named for him) and brothers James T. and John Pullen (main thoroughfares were named for them)."

On November 2, 1829, Territorial Governor John Pope—Crittenden's successor—approved the establishment of Jefferson County. Bonne’s cabin was used as the county seat; by August 1832, "Pine Bluff Town" became the county seat." The land in the county was developed as large cotton plantations, with fronts on the river for transportation. The plantations were dependent on the labor of enslaved African Americans, who comprised a majority of the population in the county well before the American Civil War.

After the war, planters in Jefferson County gradually resumed cotton cultivation and processing. The economy was driven by cotton and the Delta area was highly productive. In 1886, Jefferson County produced 55,120 bales of cotton, the most in Arkansas, and the second-most throughout the South. Transportation companies serving the county at the time included the Cotton Belt Route, the St. Louis – San Francisco Railway, Missouri Pacific, the Arkansas River Packet Company, the Wiley Jones Street Car Lines, and the Citizens Street Railway Company. The street car lines operated primarily in Pine Bluff.

According to the U.S. Census Bureau, the county has a total area of 914 square miles (2,370 km2), of which 871 square miles (2,260 km2) is land and 43 square miles (110 km2) (4.7%) is water. About 75% of the county including the largest city, Pine Bluff, is located in the Arkansas Delta with the remaining portion in the Arkansas Timberlands. Consequently, it is largely low-lying flatland to the east used primarily for agriculture and expanses of trees used for timber to the west. 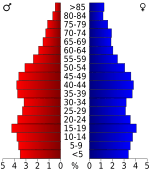 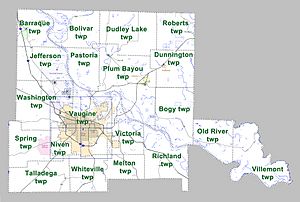 Townships in Jefferson County, Arkansas as of 2010

Townships in Arkansas are the divisions of a county. Each township includes unincorporated areas; some may have incorporated cities or towns within part of their boundaries. Arkansas townships have limited purposes in modern times. However, the United States Census does list Arkansas population based on townships (sometimes referred to as "county subdivisions" or "minor civil divisions"). Townships are also of value for historical purposes in terms of genealogical research. Each town or city is within one or more townships in an Arkansas county based on census maps and publications. The townships of Jefferson County are listed below; listed in parentheses are the cities, towns, and/or census-designated places that are fully or partially inside the township.

All content from Kiddle encyclopedia articles (including the article images and facts) can be freely used under Attribution-ShareAlike license, unless stated otherwise. Cite this article:
Jefferson County, Arkansas Facts for Kids. Kiddle Encyclopedia.