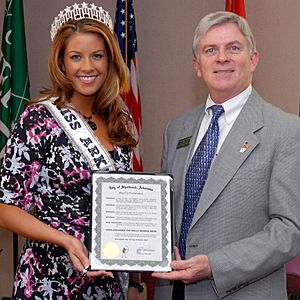 Sherwood is a city in Pulaski County, Arkansas, United States. As of the 2010 census, the population of the city was 29,523. It is part of the Little Rock−North Little Rock−Conway Metropolitan Statistical Area with 699,757 people according to the 2010 census.

There were 8,798 households out of which 32.6% had children under the age of 18 living with them, 57.4% were married couples living together, 10.4% had a female householder with no husband present, and 29.4% were non-families. 24.6% of all households were made up of individuals and 6.4% had someone living alone who was 65 years of age or older. The average household size was 2.42 and the average family size was 2.90.

Gravel Ridge was formally annexed during the Sherwood city council meeting on April 28, 2008, during which the territory comprising the one-time census designated place was divided along Arkansas Highway 107 into additions to the first and second wards of Sherwood.

In addition to the city's 17 community parks and recreational facilities, the following places of interest exist:

In July 2009, after city officials were notified by Eagle Bank in December 2008, the Federal Bureau of Investigation began investigating the theft of $219,913 in municipal funds. These funds were taken from the city’s checking account through an unauthorized online electronic transfer. This was the first time the city had experienced unauthorized accessing the city’s checking account via the internet. In response, city officials analyzed city’s security system to its financial network and additional safeguards and protections were implemented.

Nikki Petree was released on August 25, 2016 after spending 35 days in county jail for bouncing a $28.93 check five years ago. Judge Milas Hale, who is accused of running a modern-day debtors' prison in Sherwood, Ark., sentenced the mother to jail; the Huffington Post reports Petree has been arrested seven times in connection with that charge and paid at least $640 to the city for the charge. She told the Post she still owes the city $1,300.

"Every time [I’d] go to jail, they’d let me out immediately for $100,” Petree said in an interview. “They’d turn around and add $600 or $700 more to my bond. I couldn’t afford to pay. They cornered me, and there was no way out from underneath it. I felt overwhelmed and hopeless.

Petree said prior to her sentencing, Judge Hale asked Petree how much money she could pay today. The judge and the city are facing a federal lawsuit over their alleged practice of unconstitutionally jailing defendants who are unable to pay court fines, fees, and costs.

All content from Kiddle encyclopedia articles (including the article images and facts) can be freely used under Attribution-ShareAlike license, unless stated otherwise. Cite this article:
Sherwood, Arkansas Facts for Kids. Kiddle Encyclopedia.