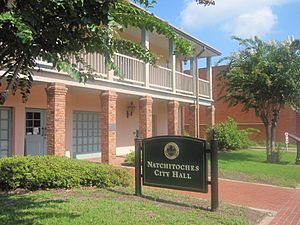 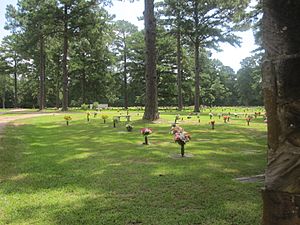 Memory Lawn Cemetery in Natchitoches
A store with live fish for sale near Natchitoches, 1940. Photo by Marion Post Wolcott.

Natchitoches (/ˈnækətəʃ/ NAK-ə-təsh; French: Les Natchitoches) is a small city and the parish seat of Natchitoches Parish, Louisiana, United States. Established in 1714 by Louis Juchereau de St. Denis as part of French Louisiana, the community was named after the indigenous Natchitoches people.

The City of Natchitoches was not incorporated until after Louisiana had become a state (1812), on February 5, 1819. It is the oldest permanent settlement in the region. Natchitoches' sister city is Nacogdoches, Texas. It is also the location of Northwestern State University.

Natchitoches was established in 1714 by Louis Juchereau de St. Denis. It is the oldest permanent settlement within the borders of the 1803 Louisiana Purchase. Natchitoches was founded as a French outpost on the Red River for trade with Spanish-controlled Mexico; French traders settled there as early as 1699. The post was established near a village of Natchitoches Indians, after whom the city was named.

After the United States' Louisiana Purchase of 1803, migration into the territory increased from the US, and Natchitoches experienced a population boom. Several plantations were built along the Red River. In the 1820s and early 1830s, Natchitoches was a freight transfer point for cotton from parts of east Texas. Cotton shippers used a land route crossing the Sabine River to Natchitoches, where the freight was transferred to boats, and floated down the Red River toward New Orleans. However, the course of the river shifted, bypassing Natchitoches and cutting off its lucrative connection with the Mississippi River. A 33-mile (53 km) lake was left in the river's previous location.

During the Civil War, Natchitoches was set on fire by Union soldiers who retreated through the town after their failed attempt to capture Shreveport. Confederate cavalry pursued the fleeing soldiers and arrived in time to help extinguish the flames before the town was destroyed, as happened in Alexandria in 1864.

In the spring of 1863, Confederate General Richard Taylor and his men passed through Natchitoches en route to Shreveport. Andrew W. Hyatt, one of Taylor's line officers, wrote in his diary: "reaching the banks of Cane River. ... We are now on a regular race from the enemy, and are bound for Grand Ecore. ..." Three days later on May 11, 1863, Hyatt penned: "We have now retreated 280 miles. Natchitoches is quite a 'town,' and the galleries were crowded with pretty women, who waved us a kind reception as we passed through town."

Around Natchitoches and its environs, 12,556 bales of Confederate cotton were stored. A match factory also opened in the city during the war. Natchitoches often engaged in fund-raising activities to relieve the destitute during the war. This historian John D. Winters observed, "Eggnog parties and other social affairs during the Christmas holiday season lifted the morale of civilians as well as that of the soldiers."

Natchitoches was the site of the 1973 plane crash that claimed the life of singer-songwriter Jim Croce. Croce had performed a concert on campus for Northwestern State University students at Prather Coliseum, but was killed less than an hour later in a plane crash headed to Sherman, Texas. The pilot may have suffered a fatal heart attack that interfered with his flying.

In 2005, the cartoonist and historian Pap Dean published Historic Natchitoches: Beauty of the Cane, a study of the history, people, and attractions of the historic city. It is one of the oldest in the state, with Harrisonburg, the seat of Catahoula Parish, being the other original French settlement.

A 35-mile (56 km) long lake was formed from a portion of the Red River when it changed course. It is now known as Cane River Lake. The municipal water supply comes from nearby Sibley Lake, a formerly drained wetland dammed in 1962 which also offers fishing and boating.

Soils in this area are a combination of leaf mold and red clays, sand and sediments. The area is part of the Chestnut Salt Dome.

Weather-wise, Natchitoches lies in a boundary region that separates the plains of Texas from the consistently humid Gulf Coast. This gives summers both heat and humidity. Winters in Natchitoches are relatively mild, with measurable snowfall once every 5–10 years. Natchitoches averages 54.93 inches (1,395 mm) of rain per year. The city is an area which frequently experiences severe thunderstorms, hail, damaging winds, and tornadoes. 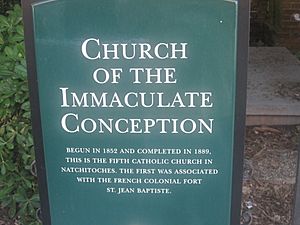 Sign detailing background of Basilica of the Immaculate Conception in Natchitoches 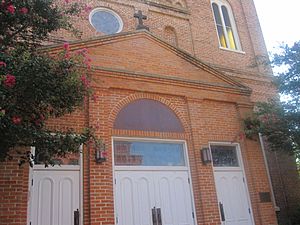 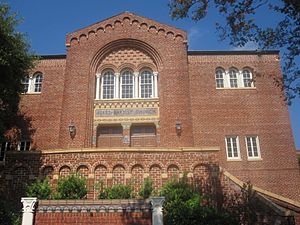 Though founded by Roman Catholics, Natchitoches has a large First Baptist Church located in the downtown district 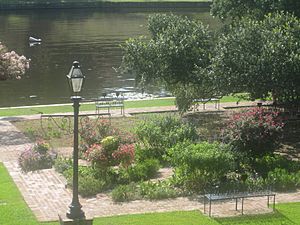 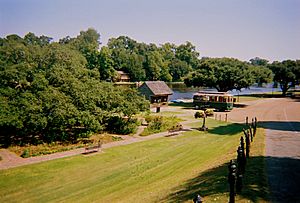 Overall look at the riverwalk in Natchitoches 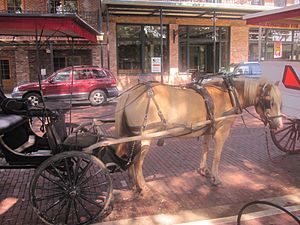 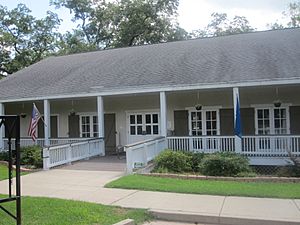 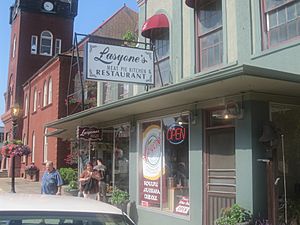 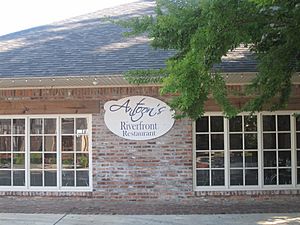 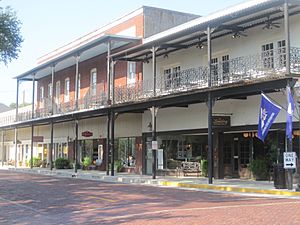 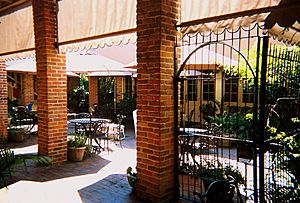 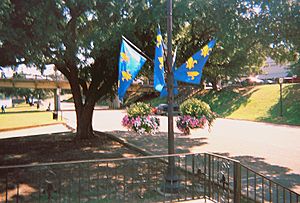 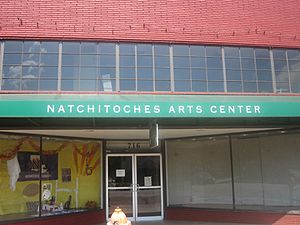 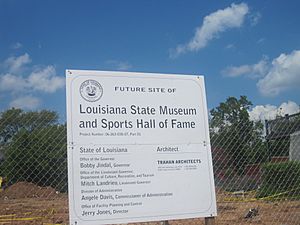 After years of planning and construction, the Louisiana Sports Hall of Fame opened downtown in 2013

There were 6,113 households out of which 30.4% had children under the age of 18 living with them, 34.3% were married couples living together, 21.5% had a female householder with no husband present, and 40.6% were non-families. 30.8% of all households were made up of individuals and 11.3% had someone living alone who was 65 years of age or older. The average household size was 2.50 and the average family size was 3.18.

A Troop 2-108TH CAV is headquartered behind the local college and the airport. This unit has deployed twice to Iraq, first as part of the 1-156TH Armor Battalion in 2004-2005 and then as part of the 2-108TH CAV SQDN in 2010. Both times this company sized element deployed with the 256th Infantry Brigade.

The Natchitoches Meat Pie is one of the official state foods of Louisiana. It is known as a regional delicacy of North Louisiana. (See List of U.S. state foods.)

Natchitoches has long been known for its popular Christmas lighting festival which is held the first Saturday in December. The lights continue to brighten the Cane River until after New Year's Day. In 2013 the festival celebrated its 87th year.

Though Natchitoches has few multi-story buildings, it has retained much of its historic European-style architecture. The city is a mesh of wrought iron, stucco and red brick. The city still has one of the original brick streets (Front Street) which the historical society protects from alterations. The city of Natchitoches recently completed a restoration project to repair the century plus old brick Front Street. During this process workers removed each brick one by one, numbered them, cleaned them, and then replaced them after utilities, drainage, and foundation were repaired beneath.

Natchitoches, a popular tourism area of the state, is equipped to serve visitors with eleven national chain hotels, and twenty-seven bed-and-breakfast inns, including the Steel Magnolia House.

Natchitoches attracts over one million visitors annually. The city is known as a retiree-friendly city. In 2006 Natchitoches was awarded the Great American Main Street Award for the effort the community has put into revitalizing and restoring much of the historic district.

The Natchitoches meat pie is a regional dish from northern Louisiana. It is one of the official state foods of Louisiana.

The city's tourism center is the downtown river walk. This includes Front Street, which becomes Jefferson at the Texas Street Light. Front Street is the jewel of the city. It overlooks the river walk and is bordered by an assortment of shops and boutiques. The city has identified this area as the Historical District. The Historical Society maintains the area through regulations on changes and restorations. Natchitoches has a mini "Walk of Fame" located in the Historical District of the city.

While visiting the area, tourists may notice many unusual structures; these are many of the Natchitoches Christmas Festival lights. The city recently built a small Convention center located on Second Street, which holds many city events.

The Bayou Pierre Alligator Park is a major tourist attraction where tourists may feed the alligators and dine and shop. The park teaches school children to respect nature and to conserve its many habitats. Natchitoches is home to a branch of the Kisatchie National Forest, a designation promoted by naturalist Caroline Dormon to preserve regional natural wonders. 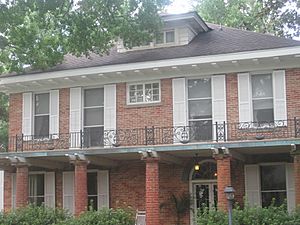 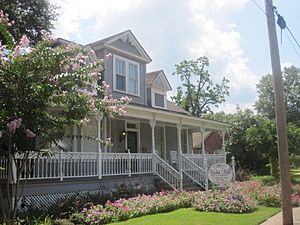 The Violet Hill Bed and Breakfast in Natchitoches

Natchitoches was the site of a gas pipeline explosion on March 4, 1965 that killed 17 people.

In 1973, singer-songwriter Jim Croce was killed when his plane crashed as it was leaving Natchitoches Regional Airport.

Natchitoches received numerous New Orleans evacuees due to Hurricane Katrina (2005). Many college students from New Orleans were transferred to Northwestern State University to continue their education.

Multiple movies have been filmed here, including:

All content from Kiddle encyclopedia articles (including the article images and facts) can be freely used under Attribution-ShareAlike license, unless stated otherwise. Cite this article:
Natchitoches, Louisiana Facts for Kids. Kiddle Encyclopedia.