Arkadelphia is a city in Clark County, Arkansas, United States. As of the 2010 census, the population was 10,714. The city is the county seat of Clark County. It is situated at the foothills of the Ouachita Mountains. Two universities, Henderson State University and Ouachita Baptist University, are located there. Arkadelphia was incorporated in 1857.

The site was settled in about 1809 by John Hemphill, operator of a nearby salt works, Arkansas's first industry. It was known as Blakelytown until 1839, when the settlement adopted the name Arkadelphia. Origin of the name "Arkadelphia" is uncertain. One possibility is that it was formed by combining Ark- from the state's name Arkansas and adelphia from the Greek meaning "brother/place".

Another explanation of the name is a combination of "adelphia" for place and "arc."

The climate is characterized by hot, humid summers and generally mild to cool winters. According to the Köppen Climate Classification system, Arkadelphia has a humid subtropical climate, abbreviated "Cfa" on climate maps.

There were 3,865 households out of which 27.0% had children under the age of 18 living with them, 38.6% were married couples living together, 15.3% had a female householder with no husband present, and 43.4% were non-families. 31.7% of all households were made up of individuals and 13.7% had someone living alone who is 65 years of age or older. The average household size was 2.26 and the average family size was 2.87. 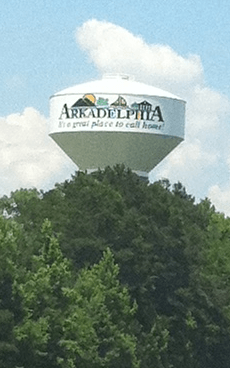 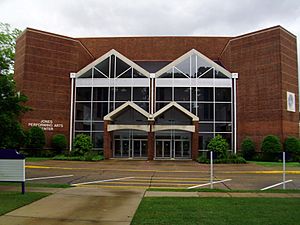 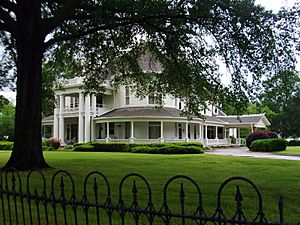 The Clark County Historical Museum contains artifacts from prehistoric times through today in an attempt to document the history of the county. Based in the former Amtrak station, a historic tour through Arkadelphia, including the historic James E. M. Barkman House. The Captain Henderson House is a historic bed and breakfast owned and operated by Henderson State University and originally inhabited by the university's namesake.

Other family attractions include the Diamond Lakes Regional Visitors Center on Highway 7 near I-30, and the Reynolds Science Center Planetarium, open to the public during the academic year, is located on the Henderson State University campus.

Arkadelphia Parks and Recreation Department operates facilities and manages activities for the community. Within Feaster Park, the department operates Arkadelphia Aquatic Park, which features water slides, swimming, and diving areas. The park includes a recreation center that has an indoor basketball/volleyball court, a weight lifting area and an elevated walking track. In 2013, the department completed construction of DeSoto Bluff Trail, which overlooks the Ouachita River.

The Caddo and Ouachita rivers merge just outside the northern city limits. Canoe and tube rentals are available in nearby Caddo Valley, Arkansas.

The Ouachita National Forest and Hot Springs National Park are located on the scenic byway, approximately 30 miles (48 km) north of Arkadelphia. To the west of Hot Springs is Lake Ouachita, which has more than 690 miles (1,110 km) of shoreline and more than 40,000 acres (16,000 ha) of water. The lake is surrounded by Ouachita National Forest. The tourist destination of Hot Springs is located adjacent to the national park. Bathhouse Row, Oaklawn Park Race Track and Casino and Magic Springs are some attractions located there.

All content from Kiddle encyclopedia articles (including the article images and facts) can be freely used under Attribution-ShareAlike license, unless stated otherwise. Cite this article:
Arkadelphia, Arkansas Facts for Kids. Kiddle Encyclopedia.