Paris is located in a river valley near the Arkansas River in the Ozark Mountain region of northwest Arkansas. Its FIPS is 53480. Its ZIP code is 72855.

There were 1,553 households out of which 28.6% had children under the age of 18 living with them, 46.0% were married couples living together, 13.7% had a female householder with no husband present, and 36.6% were non-families. 33.4% of all households were made up of individuals and 18.9% had someone living alone who was 65 years of age or older. The average household size was 2.29 and the average family size was 2.91. 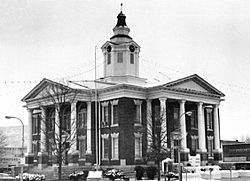 Pioneers settled into the area about 1820. The village Paris was formed on the Old Military Road between Little Rock and Fort Smith, and 5 miles (8.0 km) south of the Arkansas River. The Logan County seat, Paris, was named after the French capital in 1874. Paris was incorporated on February 18, 1879.

The villagers constructed a one-story frame courthouse. The town prison was constructed nearly three blocks from the courthouse, and remained the town's prison for many years. The prison now serves as the Logan County Museum.

Coal mining flourished. In the 1890s, Paris was a bustling city of 800 people. Citizens boasted of two newspapers, a bottling works company, nine general stores and the Paris Academy. Coal mining was the community's main industry by 1917, but declined by the 60's. As a result, community leaders sought to diversify the town's economic base. Today, the economy of Paris is benefitting from the presence of manufacturing facilities producing parts for the automotive industry and the aerospace industry. Farming and ranching remain among the largest industries in the county and tourism got a boost with the construction and opening of a 60-room, world-class lodge and guest cabins on the top of Mount Magazine, which is 19 miles from Paris. An estimated 400,000 people a year travel to Mount Magazine State Park (2008 estimate).

Paris' schools have seen a steady increase in enrollment over the last three years. The High School and Middle School switched campuses two years ago to complete a promise to the patrons that was made in 1988.

Several interests have been made in the area by bauxite mining companies looking to reduce the costs of aluminum foil production.

The Paris Express was founded in 1880, one year after the community of Paris was established and it is the oldest, continually operating business in Paris. J.T. Perryman was the first publisher and W.H.H. Harley was the first editor. During the next five years of its existence it had several owners.

In 1885 the weekly Express was purchased from Charles Noble by William M. Greenwood, former publisher of the Chismville Star and an associate with the Fort Smith Daily Tribune. Greenwood published the Paris Express for 46 years until his death in 1929.

Hugh and J.C. Park of the Van Buren Press-Argus purchased the Express from the Greenwood estate and then sold it a few months later to Wallace D. Hurley. Hurley published the paper until 1939 when it was purchased by John Guion and Robert Breeden. Guion was editor and publisher of the Express and a sister paper, the Paris Progress, and in 1946 served as president of the Arkansas Press Association. It was at that time that the Paris company began publishing the Charleston and Greenwood papers.

The Progress, which was launched in 1910 with J.W. Wagner as owner and editor, started out as a semi-weekly. In 1920 it was renamed the Paris Progress and in 1927 became a weekly. By that time Leslie and C.E. Gray, father and son, were the owners. In 1941 it was sold to John Guion.

The Paris Commercial Press, which was only in business during 1937 became consolidated with the Progress. It was also a weekly.

The papers were purchased in 1976 by Harte-Hanks Communications, Inc., of San Antonio, Tex. from John Guion. Victor Schneider continued as publisher. On Jan. 1, 1987 the newspaper was purchased by Worrell Enterprises of Lynchburg, Va.

The Paris Express located at 22 South Express, currently employs six full-time employees and one part-time employee with a circulation of 3,600.

All content from Kiddle encyclopedia articles (including the article images and facts) can be freely used under Attribution-ShareAlike license, unless stated otherwise. Cite this article:
Paris, Arkansas Facts for Kids. Kiddle Encyclopedia.