Newport is a city in and the county seat of Jackson County, Arkansas, United States located on the White River 84 miles (135 km) northeast of Little Rock. The population was 7,879 at the 2010 census.

Newport is home to a campus of the Arkansas State University system, with particular focus on training in transportation careers. Newport is known as the town in which Sam Walton owned a Ben Franklin store prior to starting Wal-Mart.

Newport has ten properties listed on the National Register of Historic Places.

The climate in this area is characterized by hot, humid summers and generally mild to cool winters. According to the Köppen Climate Classification system, Newport has a humid subtropical climate, abbreviated "Cfa" on climate maps. 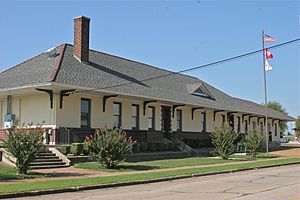 Newport is supported with public education from the Newport School District, including Newport High School.

All content from Kiddle encyclopedia articles (including the article images and facts) can be freely used under Attribution-ShareAlike license, unless stated otherwise. Cite this article:
Newport, Arkansas Facts for Kids. Kiddle Encyclopedia.