Cotton Plant is a city in Woodruff County, Arkansas, United States. As of the 2010 census, the city had a total population of 649. 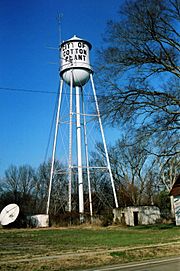 The Cotton Plant Water Tower was added to the National Register of Historic Places in 2008.

In 1820, when settlers from neighboring states first came to the Cotton Plant area, it was covered in dense timber and cane. As a small town began to take shape at the site of present-day Cotton Plant, those settlers initially gave their new community the name, Richmond.

William Lynch brought cotton seeds with him from Mississippi in 1846, and the new crop flourished. The community was forced to change its name to Cotton Plant since a community named Richmond was already registered in Little River County. On July 7, 1862, Confederate units and Cotton Plant locals skirmished with the 1st and 2nd Brigade, 1st Division, Army of the Southwest for the Union, a last-ditch effort by the Confederates to stop Samuel Curtis' march to Helena. The Confederates were soundly defeated, allowing Curtis and his army to eventually take Helena, resupply his army, and take Little Rock the following year.

A new line of the Brinkley and Batesville Railroad charged the Cotton Plant economy when it was completed in 1881. Warehouses, cotton gins, and a cotton compress brought jobs to the city, and downtown Cotton Plant became a bustling cultural center for Woodruff County. In 1908, the newly completed Missouri and North Arkansas Railroad opened up the timber industry about Cotton Plant, bringing the Standard Stave and Hoop Mill, sawmills, woodworking factories, and a veneer plant in subsequent years. Hit hard by the Great Depression, the Works Progress Administration was tasked with installing a water and sewer system in town in 1935. Residents celebrated with fireworks and parades upon the completion of the project. The community was also impacted by World War II, but boomed after the war, experiencing its most prosperous times in the 1950s.

According to the United States Census Bureau, the city has a total area of 1.0 square mile (2.6 km2), with no water bodies.

"Other Idiots from Arkansas", a track from Lewis Black's The White Album, includes an alleged news story of two men who got in a truck accident near Cotton Plant when a cartridge used in place of an automotive fuse fired off.

Public education for early childhood, elementary and secondary school students is provided by the Augusta School District, which leads to graduation from Augusta High School.

All content from Kiddle encyclopedia articles (including the article images and facts) can be freely used under Attribution-ShareAlike license, unless stated otherwise. Cite this article:
Cotton Plant, Arkansas Facts for Kids. Kiddle Encyclopedia.