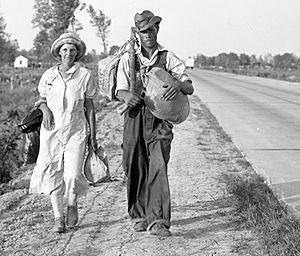 Cotton workers on the road, carrying all they possess in the world. Crittenden County, Arkansas, 1936.

Crittenden County is a county located in the U.S. state of Arkansas. As of the 2010 census, the population was 50,902. The county seat is Marion, and the largest city is West Memphis. Crittenden County is Arkansas's twelfth county, formed October 22, 1825, and named for Robert Crittenden, the first Secretary of the Arkansas Territory.

Crittenden County is part of the Memphis, TN–MS–AR Metropolitan Statistical Area. Most of the county's media comes from Memphis, although some Little Rock TV (Arkansas Educational Television Network, KATV) is imported by Comcast Cable. It lies within Arkansas's 1st congressional district. 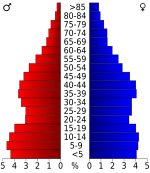 The Memphis International Airport is nearby and provides commercial aviation through numerous carriers and is the international cargo hub for FedEx.

Limited Passenger Rail is available on Amtrak at Memphis Central Station in nearby Memphis. The City of New Orleans runs twice daily on a North-South route from Chicago to New Orleans.

Interstate 55. The International Port of Memphis is the 4th largest inland port in the United States. 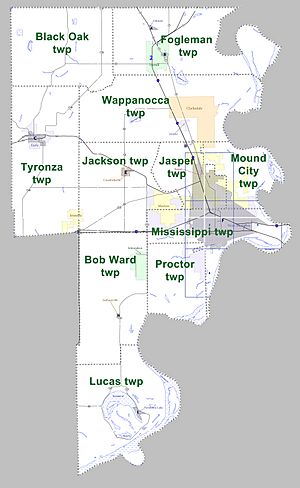 Townships in Crittenden County, Arkansas as of 2010

Townships in Arkansas are the divisions of a county. Each township includes unincorporated areas; some may have incorporated cities or towns within part of their boundaries. Arkansas townships have limited purposes in modern times. However, the United States Census does list Arkansas population based on townships (sometimes referred to as "county subdivisions" or "minor civil divisions"). Townships are also of value for historical purposes in terms of genealogical research. Each town or city is within one or more townships in an Arkansas county based on census maps and publications. The townships of Crittenden County are listed below; listed in parentheses are the cities, towns, and/or census-designated places that are fully or partially inside the township.

All content from Kiddle encyclopedia articles (including the article images and facts) can be freely used under Attribution-ShareAlike license, unless stated otherwise. Cite this article:
Crittenden County, Arkansas Facts for Kids. Kiddle Encyclopedia.