DeSoto County is a county located in the U.S. state of Mississippi. As of the 2010 census, the population was 161,252, making it the third-most populous county in Mississippi. Its county seat is Hernando.

DeSoto County is part of the Memphis, TN-MS-AR Metropolitan Statistical Area (MSA). It is the second-most populous county in the MSA. The county has lowland areas that were developed in the 19th century for cotton plantations, and hill country in the eastern part of the county.

The county is named for Spanish explorer Hernando de Soto, the first European explorer to reach the Mississippi River. The county seat, Hernando, is also named in his honor. De Soto allegedly died in that area in May 1542, although some believe that he died near Lake Village, Arkansas. See here for a list of sites associated with the 16th-century De Soto Expedition.

Indian artifacts collected in DeSoto County link it with prehistoric groups of Woodland and Mississippian culture peoples. Members of the Mississippian culture, who built complex settlements and earthwork monuments throughout the Mississippi River Valley, met Hernando DeSoto when he explored what is now North Mississippi. By tradition, he is believed to have traveled with his expedition through present-day DeSoto County. Some scholars speculate that DeSoto discovered the Mississippi River west of present-day Lake Cormorant, built rafts there, and crossed to present-day Crowley's Ridge, Arkansas. Based on records of the expedition and archeology, the National Park Service has designated a "DeSoto Corridor" from the Chickasaw Bluff (Memphis) to Coahoma County, Mississippi.

The Mississippian culture declined and disappeared; in most areas this decline preceded European contact and may have been for environmental reasons. The town named Chicasa, which De Soto visited, was probably the ancestral home of the historical Chickasaw, who were descended from the Mississippian culture. They had long lived in the area when white settlers began arriving as pioneers. Present-day Pontotoc, Mississippi developed near their "Long Town," made up of several villages close to each other. The Chickasaw claimed much of western Tennessee and northern Mississippi as their hunting grounds.

The Chickasaw people traded with the French, who established some settlements among them. France ceded its territories east of the Mississippi River to Britain following the Seven Years War. The United States acquired it by gaining independence from Britain.

The Chickasaw finally ceded most of their land to the United States under pressure during Indian Removal, and a treaty in 1832. They were forced to remove to Indian Territory west of the Mississippi River.

Negotiations begun in September 1816 between the United States government and the Chickasaw nation, concluded with the signing of the Treaty of Pontotoc in October 1832. During these 16 years, federal officials pressed the Chickasaw for cessions of land to enable white settlement. Congress passed the Indian Removal Act in 1830, authorizing forcible removal if necessary to extinguish Native American claims in the Southeast. From 1832 to 1836, government surveyors mapped the 6,442,000 acres (26,070 km2) of the Chickasaw domain, dividing it into townships, ranges and sections. The Mississippi Legislature formed 10 new counties, including DeSoto, Tunica, Marshall and Tate, from this territory.

By treaty the land was assigned by sections of 640 acres (2.6 km2) to individual Indian households. The Chickasaw, a numerically small tribe, were assigned 2,422,400 acres (9,803 km2) of land using this formula. The government disposed of the remaining 400,000 acres at public sale. The Indians received at least $1.25 per acre for their land. The government land sold for 75 cents per acre or less.

During and after the Civil War, this area was developed by planters as cotton plantations, a leading commodity crop. They depended on the labor of thousands of enslaved African Americans. After the war, many freedmen stayed in the area, but shaped their own lives by working as sharecroppers or tenant farmers, rather than on large labor gangs on the plantations. Reliance on agriculture meant that the area did not develop much economically well into the 20th century, and both whites and blacks suffered economically.

In 1890 the state legislature disenfranchised most blacks under the new constitution, which used poll taxes and literacy tests to raise barriers to voter registration. Many people left the rural county for cities to gain other opportunities. Most blacks could not vote in Mississippi until the late 1960s, after passage of federal legislation. 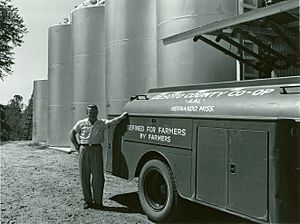 During the Great Depression, the Southern Tenant Farmers Union was organized in 1934, open to both black and white sharecroppers. It worked to gain better deals and fair accounting from local white landowners. Whites in DeSoto County resisted this effort.

Since the late 20th century, DeSoto has had considerable suburban development related to the growth of Memphis.

Part of the Memphis, Tennessee metropolitan area, in the early 21st century DeSoto County has become one of the 40 fastest-growing counties in the United States. This fast-paced growth is attributed to suburban development as middle-class and wealthier blacks leave Memphis for newer housing. They commute to Memphis for work. Some observers have characterized this shift as black flight, but it is also typical of the pattern of post-World War II suburban growth, in which people who could afford it moved to newer housing in suburbs.

Such suburban residential development in the county has been most noticeable in the cities of Southaven, Olive Branch and Horn Lake, Mississippi. Also stimulating development in the formerly rural area is the massive casino/resort complex located in neighboring Tunica County (this is the third-largest gambling district in the United States).

I-55 recently underwent major widening from four lanes to ten from the MS/TN state line south to Goodman Road. Eventual widening of the freeway from Goodman Rd. to Star Landing Rd. is believed to include the addition of new exits at Nail Rd. and Star Landing Rd.

I-269 is a metro Memphis outer loop connecting the cities of Hernando and Olive Branch in Mississippi with Collierville and Millington in Tennessee.

As of the 2013 U.S.census estimates, there were 168,240 people residing in the county. 70.3% were non-Hispanic White, 21.5% Black or African American, 1.6% Asian, 2.6% Native American, 0.1% Pacific Islander, 5.0% were Hispanic or Latino (of any race). The median income for a family was $66,377 and the mean income was $75,875. DeSoto County has the highest median income in Mississippi and the second highest mean income after Madison County. According to the 2000 census, the largest self-identified ancestry groups in DeSoto County were English 53.1%, Scots-Irish 15.1%, African 11.4%, and Irish 4.5%. Since then the percentage of African-American population in the county has nearly doubled, along with strong overall increases in the total county population.

DeSoto County is known for its golf courses. Velvet Cream, known as 'The Dip' by locals, is a landmark restaurant in the county. Operating since 1947, it is the oldest continually running restaurant in the county. In 2010, it was awarded 'Best Ice Cream in Mississippi' by USA Today. DeSoto County was also previously known as the home of Maywood Beach, a water park that closed in 2003 after more than 70 years of operation. 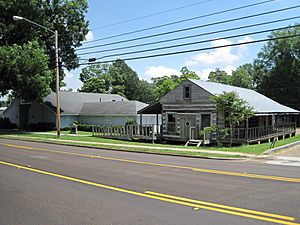 A popular attraction is the DeSoto County Museum located in the county seat of Hernando. The museum is open Tuesday through Saturday from 10-5. Admission is free but donations are encouraged. Exhibits include displays on Hernando DeSoto, Civil War history, French colonial and American antebellum homes of the county, civil rights, and the history of each of the county's municipalities.

An eighteenth-century French colonial log house (see photo to the right) has been preserved from the time of French trading and settlement along the Mississippi. This house is similar in style to several French colonial houses preserved in Ste. Genevieve, Missouri, where many French settled after France ceded its territory east of the Mississippi to Great Britain following its defeat in the Seven Years War.

Hernando DeSoto Park, located on Bass Road 6 mi (9.7 km) west of Walls, is a 41 acres (17 ha) park that features a hiking/walking trail, river overlook, picnic area, and boat launch. It is the only location in DeSoto County with public access to the Mississippi River.

All content from Kiddle encyclopedia articles (including the article images and facts) can be freely used under Attribution-ShareAlike license, unless stated otherwise. Cite this article:
DeSoto County, Mississippi Facts for Kids. Kiddle Encyclopedia.