Walls is a town located in northern DeSoto County, Mississippi, United States, near the Mississippi River, part of the larger region known as "The Delta", and known for its rich, dark soil. As it is in the upper northwest corner of Mississippi, it is in the Memphis, Tennessee metropolitan area. Its ZIP code is 38680. As of the 2010 census it had a population of 1,162, with an estimated population of 1,263 in 2014.

A relatively young community, Walls was originally named "Alpika", an old Chickasaw Indian word. The name was changed to Walls in 1906.

Walls was named after Captain June Walls, who served in the Civil War. Captain Walls was an early settler and merchant of the region in the 1880s.

A Mississippian culture village site near Walls, the Walls Site, gives its name to the Walls Phase, the last prehistoric cultural expression before European contact. The historic trail of Hernando de Soto leads through DeSoto County to near Walls.

Today, Walls is a community rich in agriculture. Cotton, soybeans, rice and corn are planted each spring. The railroad played a vital part in the growth of the area in the early to mid 1900s. The mechanical revolution of the 1950s and 1960s changed Walls, as well as many other Delta communities. 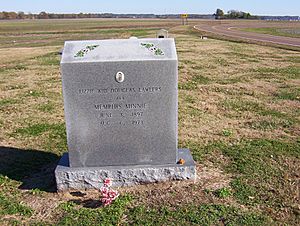 The town was home to noted blues singer Memphis Minnie, whose family moved to Walls from Algiers, Louisiana, in 1904, when she was 7 years old. She won top female vocalist in the first Blues Unlimited Readers' Poll in 1973. In 1980, she was elected to the Hall of Fame at the inaugural W.C. Handy Awards. Memphis Minnie died August 6, 1973, and is buried in New Hope Cemetery in Walls. Her headstone was made possible by contributions from Bonnie Raitt and John Fogerty.

A significant part of the community is the Sacred Heart League, operator of the Sacred Heart School in Walls. The league raised funds through the sale of a famous statue of Jesus Christ. In the 1960s, the statue could be found on the dashboards of vehicles across America.

Subdivisions (in the city limits)

The Leatherman family has begun to develop industrial, commercial and residential projects in town limits of Walls. The first industrial tenant, Sigma Supply Co., has moved into a new 254,000-square-foot (23,600 m2) building off US 61 and Star Landing Road in the Leatherman 325-acre (1.32 km2) industrial park. Sigma Supply is a distributor of industrial and packaging equipment and facilities supplies. The 1,900-acre (7.7 km2) Leatherman Planned Unit Development in Walls touts a new elementary school with 900 students, which opened in August 2008, joining Lake Cormorant Middle School that currently has 700 students. Lake Cormorant High School opened in 2011.

All content from Kiddle encyclopedia articles (including the article images and facts) can be freely used under Attribution-ShareAlike license, unless stated otherwise. Cite this article:
Walls, Mississippi Facts for Kids. Kiddle Encyclopedia.