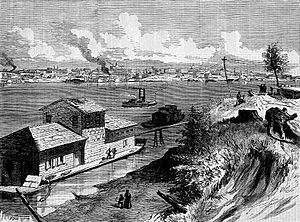 The Chickasaw Bluff is the high ground rising about 50 to 200 feet (20–60 m) above the Mississippi River flood plain between Fulton in Lauderdale County, Tennessee and Memphis in Shelby County, Tennessee.

This elevation, shaped as four bluffs, is named for the Chickasaw people. Known in the 19th century as one of the Five Civilized Nations in the Southeast, they occupied much of this area in western Tennessee and Mississippi. By their control of the bluffs, they could impede French river traffic in the 18th century when the peoples were at war.

The Chickasaw Bluffs were numbered by rivermen from one to four, starting from the north.

The Chickasaw Bluffs are a relatively recent feature. They were formed from pleistocene loess (wind-blown) silt. This loess can be as thick as 70 feet and it generally tapers off as one moves eastward. The loess accumulated on top of fluvial deposits from the pliocene. These primarily consist of terrace gravels deposited from glacial runoff. Because of this, the bluffs are slide-prone, especially during seismic activity. The bluffs are characterized by very steep valleys and have higher gradient streams than areas to the east or west. Along the western edges facing the river or alluvial plains, the bluffs form nearly vertical cliffs. In Memphis, these edges have been smoothed out in the downtown area.

Although the Chickasaw Bluffs refer to the four numbered formations in Tennessee, the geological feature stretches from Hickman, Kentucky to around Baton Rouge, Louisiana. They do not form a continuous band, as they are split by river valleys such as the Obion River, Forked Deer River, Hatchie River, Loosahatchie River, Wolf River, Coldwater River, and Tallahatchie River.

The fourth Chickasaw Bluff was the site of the French Fort Assumption, used as a base against the Chickasaw in the abortive Campaign of 1739. The Chickasaw Bluff secured Memphis from river floods, while a rare shelf of sandstone below provided a secure boat landing, making this the "only site for a commercial mart" between the Ohio River and Vicksburg, Mississippi. This location was also the meeting place of d'Artaguette, Chicagou and de Vincennes before their ill-fated 1736 attack against the Chickasaw. 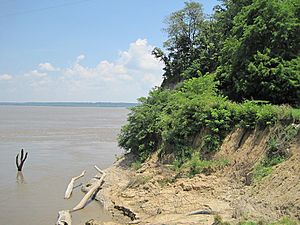 The French built their Fort Prudhomme, or Prud'homme, at one of the Chickasaw Bluffs in 1682. René-Robert Cavelier, Sieur de La Salle (1643–87) was a French explorer. In 1682, La Salle led a canoe expedition to explore the Mississippi River basin. The expedition landed to hunt, when one of their members went missing. The armorer Pierre Prudhomme was assumed captured by Chickasaw Indians.

La Salle decided to stay and search for the missing member. La Salle had a stockade built and named it Fort Prudhomme, after their lost man. This was the first structure built by the French in Tennessee. Days later, the missing man found his way back to La Salle. Prudhomme had lost his way while hunting. The expedition reached the mouth of the Mississippi River on April 6, 1682.

All content from Kiddle encyclopedia articles (including the article images and facts) can be freely used under Attribution-ShareAlike license, unless stated otherwise. Cite this article:
Chickasaw Bluff Facts for Kids. Kiddle Encyclopedia.