Olive Branch is a city in DeSoto County, Mississippi, United States. The population was 33,484 at the 2010 census, up from 21,054 in 2000. Olive Branch is part of the Memphis Metropolitan Statistical Area, a region that consists of three counties in southwest Tennessee, five counties in northwest Mississippi, and two counties in eastern Arkansas. From 1990 to 2010 Olive Branch was the fastest growing city in the United States, with a growth rate of 838%. Along with other rapidly growing places in DeSoto County, Olive Branch attributes most of its growth and development to the exodus of large numbers of families from central Memphis. 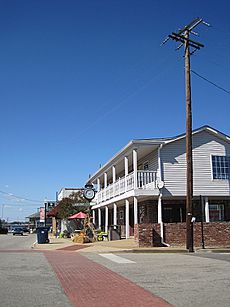 The first permanent Anglo settlers in the area were Stephen Flinn and his wife's brother-in-law, Milton Blocker. On April 13, 1836, they purchased 1,280 acres (5.2 km2) of land – known as Sections 34 and 35 – in newly created DeSoto County from Chickasaw chief Lush-Pun-Tubby for $1,600. Flinn conveyed the land to Blocker for $6,400 in 1840. A small community initially known as "Cowpens" sprang up in the early 1840s. The name was changed to "Watson's Crossroads" in 1842. In 1846, when a post office was established, the name was changed again to "Olive Branch". Mrs. Frances Wilson Blocker, a descendant of one of the community's founders, suggested the name as a way to symbolize the biblical story of a dove bringing a branch to Noah. With the exception of a few skirmishes occurring in an area southwest of the community, Olive Branch escaped much of the destruction and violence during the Civil War.

Olive Branch was incorporated as a town on May 1, 1874. Ben Wesson was elected as the first mayor. At the first census conducted after incorporation in 1880, the population was 73. A railroad line was built through Olive Branch in 1885, connecting the town to Memphis and Birmingham. The town was officially designated a village on March 6, 1888.

At the turn of the century, nearly 200 people lived in Olive Branch. In the ensuing years, several modern amenities were introduced in the village, including the first cotton gin (1910), a public water system (1922), and electrical service (1927). T.H. Norvell's cheese plant (at the side of present-day BancorpSouth) opened in 1929, becoming the first major industry in Olive Branch. A public sewer system was built, and local streets were paved circa 1940. The village experienced modest growth during the next few decades, rising from 441 in the 1940 census, to 534 in 1950, and 642 in 1960. Growth accelerated in the 1960s, and by 1970 the population had more than doubled to 1,513. In 1971, a site located a few miles from downtown Olive Branch was chosen as the home of Holiday Inn University and Conference Center. Simultaneous with construction of the University, Holiday Inn began work on a 3,000-acre (12 km2) industrial park. This was followed by the opening of Olive Branch Airport in January 1973. With a runway length of 6,000 feet (1,800 m), it is currently one of Mississippi's five most active airports for landings and takeoffs. U.S. Highway 78 was built through Olive Branch in 1974. Such developments and infrastructure improvements brought an influx of jobs, industries, and people to DeSoto County and Olive Branch.

Olive Branch is located in northeastern DeSoto County, at the junction of U.S. Route 78, and State Highways 302 (known locally as Goodman Road) and 305 (Germantown Road/Cockrum Street). Via US 78 it is 22 miles (35 km) northwest to the center of Memphis.

Many locally owned, small businesses have been operating in Olive Branch for several decades. Examples are Old Style Barbecue and Olive Branch Printing. Several regional businesses, such as Bancorpsouth and Holiday Inn, are also located in the area. In 2003 Memphis lost its only permanent indoor ice rink with the closure of the troubled Mall of Memphis. A new rink opened in Olive Branch in August 2011.

Olive Branch is served by the DeSoto County School District. Private schools include:

A railroad line to Birmingham from Memphis runs through Olive Branch. It is used by BNSF.

Olive Branch is served by Olive Branch Airport. The closest airport with commercial air service is Memphis International Airport, which is about 30 minutes by car from Olive Branch.

All content from Kiddle encyclopedia articles (including the article images and facts) can be freely used under Attribution-ShareAlike license, unless stated otherwise. Cite this article:
Olive Branch, Mississippi Facts for Kids. Kiddle Encyclopedia.