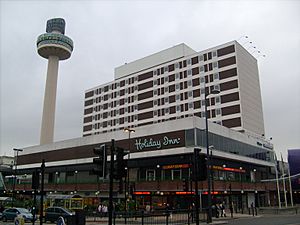 The Holiday Inn in Liverpool

Holiday Inn is a brand of hotels. Holiday Inn is one of the world's most recognized hotel brands. It is part of the InterContinental Hotels Group (IHG).

Kemmons Wilson had the idea for the business after a family road trip to Washington, D.C.. During the trip, he was disappointed by the quality of roadside motels at that time. Mr. Wilson partnered with Wallace E. Johnson to build the first four motels on roads entering Memphis, Tennessee. Eddie Bluestein was the architect who designed these first hotels. He named the first one Holiday Inn after a Bing Crosby movie as a joke.

All content from Kiddle encyclopedia articles (including the article images and facts) can be freely used under Attribution-ShareAlike license, unless stated otherwise. Cite this article:
Holiday Inn Facts for Kids. Kiddle Encyclopedia.