Altus is a city in Franklin County, Arkansas, United States. Located within the Arkansas River Valley at the edge of the Ozark Mountains, the city is within the Fort Smith metropolitan area. The epicenter of the Altus American Viticultural Area (AVA) within Arkansas Wine Country, the city is home to four wineries. Although founded as a coal mining community, the wine industry has driven the Altus economy since the first vineyards were planted in 1872. The population was 758 at the 2010 census, down from 817 at the 2000 census.

When the Iron Mountain Railroad laid rails up the Arkansas River Valley in the 1870s from Little Rock to the Oklahoma border at Fort Smith, Altus was the highest point on the track. In recognition of this highest railroad elevation between Little Rock and Fort Smith, the station was originally known as "Summit". The town's initial development was due to railroad efforts encouraging German immigration to settle lands adjacent to the railroad. In 1903, the railroad mainline was shifted to a more favorable alignment along the Arkansas River. The track through Altus was removed in the 1930s, but the railroad station has been preserved as a commercial establishment.

Altus is also the former site of Hendrix College.

Altus is located in southeastern Franklin County, bordered to the south by the town of Denning. Wiederkehr Village is directly to the north. U.S. Route 64 passes through the center of Altus, leading northwest 5 miles (8 km) to Ozark and east 17 miles (27 km) to Clarksville. The Arkansas River is 3 miles (5 km) to the west.

Altus is south of the Boston Mountains range between the Ozark Mountains to the north and the Ouachita Mountains to the south. The soil type here is generally linker on the hilltops: a sandy loam, slightly acid soil and good for grape growing. Several wineries are located in Altus, and it is the location of the Altus American Viticultural Area.

According to the United States Census Bureau, the city has a total area of 1.8 square miles (4.7 km2), all of it land.

There were 339 households out of which 31.3% had children under the age of 18 living with them, 46.6% were married couples living together, 12.7% had a female householder with no husband present, and 35.1% were non-families. 29.2% of all households were made up of individuals and 13.9% had someone living alone who was 65 years of age or older. The average household size was 2.41 and the average familiar size was 2.96. 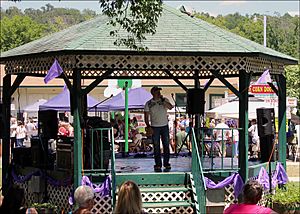 Live entertainment at the 2013 Grape Festival

Altus is home to three wineries and the Altus AVA (Chateau aux Arc Winery, Mount Bethel Winery, and Post Familie Winery). The Wiederkehr Winery is located north of Altus in Wiederkehr Village. The annual Spring Gala, Grapefest, Dinner in the Vineyards, and Wineaux Fest are held in Altus each year.

Altus was the location for the first season of the television show The Simple Life, starring Paris Hilton and Nicole Richie.

All content from Kiddle encyclopedia articles (including the article images and facts) can be freely used under Attribution-ShareAlike license, unless stated otherwise. Cite this article:
Altus, Arkansas Facts for Kids. Kiddle Encyclopedia.