Ozark is a city in Franklin County, Arkansas, United States and one of the county's two seats of government. The community is located along the Arkansas River in the Arkansas River Valley on the southern edge of the Ozark Mountains. As of the 2010 census it had a population of 3,684.

Incorporated in 1850, Ozark is adjacent to much of Arkansas wine country, and contains a bridge to cross the Arkansas River for travelers heading to points south. The city is also located on Arkansas Highway 23, nicknamed the Pig Trail Scenic Byway, known for its steep drops, sharp curves and scenic mountain views.

The name Aux Arcs, later simplified to "Ozark", was given to this bend of the river by the French explorers when they were mapping out this land.

Native Americans roamed the area freely before Arkansas was a territory. The Cherokee and Osage lived in this area that would later become attractive to settlers. The Ozark area was frequented by French fur trappers and served as a landmark during European exploration of the area. It was these adventurous souls who gave the area and the rolling mountains that rise there their name, Aux Arcs.

Included in the Louisiana Purchase of 1803, the vicinity became a stopping and crossing point along the Arkansas River. The modern settlement of Ozark was established here in the 1830s, and an important road grew connecting Ozark to Fayetteville, Arkansas, following the route of today's Pig Trail Scenic Byway to connect Northwest Arkansas with the river.

Ozark played a role on the Trail of Tears. Steamboats would often stop here in times of low water and Native Americans camped in Ozark before moving to Oklahoma on foot. The waterfront is a designated stop on the trail of tears route.

Ozark's population grew to about 100 people during the Civil War and served as a Confederate base after the battles of Pea Ridge and Prairie Grove in 1862. In April 1863, Brigadier General William L. Cabell led 900 men from Ozark on an expedition that ended at the Battle of Fayetteville. Ozark became the scene of fighting later that year and again in 1864, where many skirmishes were fought in the vicinity. A monument on the grounds of the Franklin County Courthouse pays tribute to an officer killed just north of town.

Although Ozark prospered over the years, it remained a small city on the river.

The name "Ozark" comes from Aux Arcs, the name given to the area and the mountains that rise there by early French settlers. Ozark, Arkansas, was the first community to be incorporated with that name.

The climate in this area is characterized by hot, humid summers and generally mild to cool winters. According to the Köppen Climate Classification system, Ozark has a humid subtropical climate, abbreviated "Cfa" on climate maps. 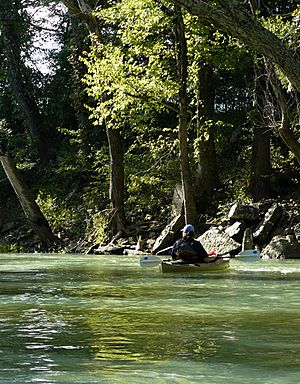 Canoeing on the Mulberry River

Downtown Ozark features a number of historic sites. Among these is the old Missouri Pacific Depot, which now serves as a museum and houses many artifacts related to the city's history. Murals can be found throughout the city. The quintessential square is filled with window store fronts full of antique and gift shops, crape myrtle shrubs in bloom summer through fall, and a park across from the courthouse.

The city serves as the southern access point for the Pig Trail Scenic Byway. This 19-mile (31 km) scenic drive begins 11 miles (18 km) north of Ozark where Highway 23 enters the Ozark National Forest. The Pig Trail leads drivers through beautiful rolling mountain country and past waterfalls, rock formations and the beautiful Mulberry River, popular for kayaking and canoeing. Ozark is a popular place for food and rest while exploring the Pig Trail Scenic Byway.

The view from the Arkansas River Bridge in Ozark is ranked among the most beautiful in America and is especially appealing when lit at night.

Ozark Lake on the Arkansas River provides plenty of fishing opportunities. Tree-shaded Aux Arc Park stretches along the river from the Ozark Lock and Dam and has a playground, campsites, boat launching ramps and other facilities. Within miles of Ozark are the Mulberry River and White Rock Mountain Recreation Area in the Ozark National Forest.

Ozark is in the heart of Arkansas Wine Country along with the cities of Altus, Wiederkehr Village, and Paris.

In the first season of the reality TV series The Simple Life, Paris Hilton and Nicole Richie worked at the Sonic Drive-In in Ozark.

On April 17, 2007, Late Late Show host Craig Ferguson mentioned Ozark during his guest appearance on the Late Show with David Letterman. While telling Dave a story about travelling the country, Craig said he had stopped in "Ozark, which is a town in Arkansas," and discovered catfish. It was the first time Craig had eaten catfish. He described it as being "a tasty fish". On June 14, 2007, Ferguson displayed a letter from Mayor Vernon McDaniels, making Ferguson an honorary citizen of Ozark. After becoming an honorary citizen, Ferguson set out to become an honorary citizen of as many U.S. cities as possible and later became an official U.S. citizen, all thanks to Ozark starting the trend. On June 25, 2009, Ferguson again mentioned Ozark during his opening monologue. He told his audience that Ozark was the place to stop for good catfish and described it as a "lovely town". Ferguson later financed a bond to build a $415,000 turf field for their high school football team in 2010.

Public education for elementary and secondary school students is provided by the two school districts:

All content from Kiddle encyclopedia articles (including the article images and facts) can be freely used under Attribution-ShareAlike license, unless stated otherwise. Cite this article:
Ozark, Arkansas Facts for Kids. Kiddle Encyclopedia.