Booneville is a city in Logan County, Arkansas, United States and the county seat of its southern district. Located in the Arkansas River Valley between the Ouachita and Ozark Mountains, the city is one of the oldest in western Arkansas. The city's economy was first based upon the railroad and Arkansas State Tuberculosis Sanatorium. It has developed a diverse economy of small businesses and light industry. Booneville's population was 3,990 at the 2010 census.

Booneville supports a community center, a senior-citizens center, a community hospital, a municipal airport, and new school facilities. Hunting, fishing, camping, hiking, and other outdoors activities are readily available in nearby national forests and state parks.

View of Booneville's intersection of Main Street and Broadway during the turn of the 20th century.

The city was founded in 1828 when Walter Cauthron, an early explorer of the Arkansas Territory, built a log cabin and store along the Petit Jean River. Intending to name the community "Bonneville" for friend Benjamin Bonneville, the name was later changed. Another theory is that the name was to honor Daniel Boone, a friend of the Logan family for which the county is named. 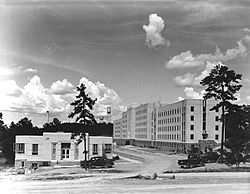 Sanatorium administration on the left and Nyberg Building on the right

The Arkansas State Tuberculosis Sanatorium was established in 1909 about three miles (5 km) south of Booneville. Once fully established, the sanatorium was the relocation center for all white Arkansans with tuberculosis. By the time the facility was closed in 1973, it had treated over 70,000 patients. The main hospital, named the Nyberg Building after Leo E. Nyberg, a former sanatorium patient and state legislator who sponsored the bill funding the construction, was completed in 1941. The facility became known worldwide as one of the most successful and modern hospitals for the treatment of tuberculosis of its day.

The sanatorium complex was self-sustaining, with dormitories, staff entertainment buildings, a chapel, laundry, dairy, water treatment plant, independent telephone system, and even a fire department. At the height of its use, the complex employed nearly 300 staff members. At one point, the total population of the center was greater than that of Booneville, in the valley below.

With the introduction of more effective drug therapy, the patient population began to decline. Eventually the sanatorium was closed in 1973. The campus is currently used as the Booneville Human Development Center, a state-run residential program for adults with mild and moderate intellectual disability and other developmental disabilities.

On March 23, 2008, Easter Sunday, a series of explosions destroyed the Cargill Meat Solutions plant, which employed approximately 800 people, making it by far the town's largest employer. Cargill exploded when 88,000 pounds of anhydrous ammonia and 100,000 pounds of carbon dioxide were ignited by sparks from a welder, causing the evacuation of at least 1,000 of Booneville’s roughly 4,000 residents, and leaving nearly 800 people without a job. Because of this tragic event, the town’s population drastically dropped in size and went into what many people began calling the “small-town recession.” On May 2, 2008 Cargill announced that the plant would not be rebuilt. 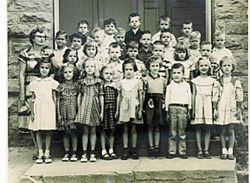 From its early days, Booneville has supported education. In 1874, as a response to needs for higher learning in western Arkansas, the Fort Smith District of the Methodist Episcopal Church, South, authorized the establishment of the Fort Smith District High School in Booneville, 40 miles to the west. Local church members donated the land, building materials, and labor. The school, located on South College Street, was to be supported by student tuition fees. Students came from towns all over western Arkansas to board with Booneville families and attend a school that offered an advanced curriculum, including Latin, German, advanced mathematics, literature, and music. The school functioned until the early 1900s.

After the school closed, a group of residents and business leaders formed the Booneville Education Association and acquired 9 acres (36,000 m2) of land in the northwest part of town. The new school was called the Booneville Co-Educational Institute and also offered a more advanced curriculum than the public school around. Graduates were admitted as sophomores at the University of Arkansas at Fayetteville. 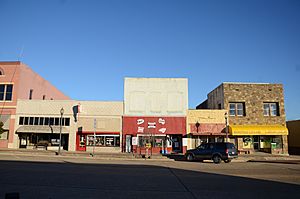 The city is located at the intersection of Highway 23 (commonly known as the "Pig Trail") and Highway 10. Both routes are designated as Arkansas Scenic Byways near Booneville. Highway 217 also runs north and south from the city.

Rights-of-way for downtown city streets dedicated during the original town plat are wider than in most communities.

The city of Booneville owns the Booneville Water Department, which treats and distributes potable water from Lake Booneville to the residents and commercial users of the city in accordance with Arkansas Department of Health regulations.

All content from Kiddle encyclopedia articles (including the article images and facts) can be freely used under Attribution-ShareAlike license, unless stated otherwise. Cite this article:
Booneville, Arkansas Facts for Kids. Kiddle Encyclopedia.