Carolan is an unincorporated community in Logan County, Arkansas, United States. It lies five miles to the southwest of Booneville on State Highway 23. Carolan is named for William Philip Carolan, early farmer and merchant in the area. He was born on April 16, 1800 in South Carolina. He was married on September 12, 1822 in South Carolina to Hannah A. (nee Seeley), who was born on April 5, 1807 in South Carolina. Both died in the community of Carolan, on April 16, 1875 and April 9, 1877, respectively. They are buried in the Carolan Community cemetery. An amusing inscription on William Philip Carolan's tombstone describes him as "Baptist and Democrat". 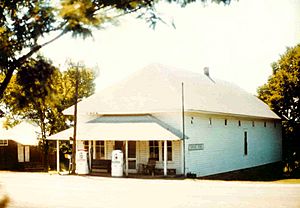 The Founding Family and First Business

Headstone of William P.Carolan, patriarch and founder of Carolan, AR

One of William Philip Carolan's son, Samuel "Sam" Thompson Carolan, opened the first general store in the community in 1878, three years after his father's death. "Sam" Carolan also opened a cotton gin and blacksmith shop. He was also the postmaster. 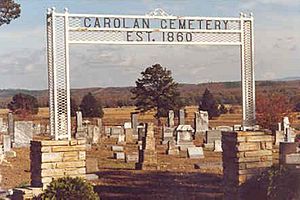 In its heyday, Carolan had a school, and two churches, Baptist and Methodist.

Descendents of William Philip Carolan and Hannah A. (Seeley) Carolan still live in the area.

All content from Kiddle encyclopedia articles (including the article images and facts) can be freely used under Attribution-ShareAlike license, unless stated otherwise. Cite this article:
Carolan, Arkansas Facts for Kids. Kiddle Encyclopedia.