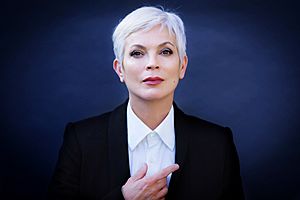 Elizabeth Ward Gracen (3 April 1961) is a former Miss America Pageant winner and American actress who acted in movies and television programs before 2000. She was crowned Miss America 1982, and Miss Arkansas before that. Her acts included acting as Amanda in the TV show Highlander: The Series. She was born near Ozark, Arkansas and graduated from Russellville High School in 1979.

Gracen played roles in other films such as

She also appeared in TV series such as

All content from Kiddle encyclopedia articles (including the article images and facts) can be freely used under Attribution-ShareAlike license, unless stated otherwise. Cite this article:
Elizabeth Gracen Facts for Kids. Kiddle Encyclopedia.