Paris Whitney Hilton (born February 17, 1981) is an American celebrity, socialite (someone who is very social and goes to a lot of parties and events), media personality, model, singer, author, fashion designer and actress. Her great-grandfather founded the Hilton Hotels. She is an heiress (meaning she will receive part of the Hilton Hotel fortune which her family runs). Right now she lives in the city of Los Angeles, which is in the state of California. She has a little dog named Tinkerbell, who is a small type of Chihuahuha.

Hilton and her friend Nicole Richie were the stars of the reality show The Simple Life for five seasons.

NYC's Waldorf-Astoria Hotel, where Hilton spent her teenage years and started as a socialite

Paris Hilton was born in New York City. Paris is the oldest of four children. Her father is Richard and her mother is Kathy. She has a sister named Nicky who is three years younger than she is, and younger brothers, Conrad and Barron. Her grandfather is Barron Hilton and her great-grandfather was Conrad Hilton. Her step-great-grandmother was actress and socialite Zsa Zsa Gabor.

Paris Hilton lived in the Waldorf-Astoria area of Manhattan, which is part of New York City. She also lived in Beverly Hills, which is part of Los Angeles, and the Hamptons, which is on Long Island in New York. As a child she was good friends with Nicole Richie and Kim Kardashian. Her other childhood best friend is Nicky Hilton, her sister, who she spent a lot of time with and she still does.

She went to her first year of high school at the Marywood-Palm Valley School in Rancho Mirage, California. Then she went to the Dwight School in New York for her second and third years of high school. A lot of people know that she went to school there with famous pop singer Lady Gaga. She then had to move to the Canterbury Boarding School, in New Milford, Connecticut. Hilton played ice hockey there. She was forced to stop going to the school in the year 1999 because she did not follow the school rules. 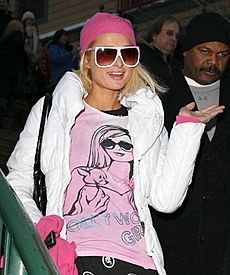 Hilton at the 2008 Sundance Film Festival

When Paris Hilton was a child she began modeling, most often at charity events. When she was 19, she joined Donald Trump's modeling agency, T Management. Hilton has also worked with Ford Models in New York, Models 1 Agency in London, Nous Model Management in Los Angeles, and Premier Model Management in London. Her picture is in many advertisements, and some of them are Iceberg Vodka, GUESS, Tommy Hilfiger, Christian Dior, and Marciano. In 2001, people started looking at her as a socialite, and everyone called her "New York's leading 'It Girl'" (a girl who is good at knowing what clothes are stylish to wear and knows the latest gossip).

Paris Hilton has appeared in a few movies. Her biggest role was in a scary movie called The House of Wax. She also played small roles, called cameo roles, in the movies Zoolander, Wonderland, and The Cat In The Hat. She played supporting roles in Nine Lives, Raising Helen, and The Hillzu.

Paris Hilton is known for television shows the Simple Life and The Simple Life 2. She did the show with her friend Nicole Richie. It was broadcasted on FOX TV until 2004 and was then picked up by E! Network for two more seasons before cancellation in 2006. Hilton has also played guest roles, in episodes of The O.C., The George Lopez Show, Las Vegas, American Dreams, Dogg After Dark, and Veronica Mars. Also, she was in a few music videos, for example "It Girl" by John Oates and "Just Lose It" by Eminem. In April 2008, she guest starred on the My Name is Earl episode "I Won't Die with a Little Help from My Friends".

Paris made her own album which is called Paris.

In early 2004, Paris Hilton began selling a book about herself, Confessions of an Heiress: A Tongue-in-Chic Peek Behind the Pose, which was mostly written by Merle Ginsberg.

All content from Kiddle encyclopedia articles (including the article images and facts) can be freely used under Attribution-ShareAlike license, unless stated otherwise. Cite this article:
Paris Hilton Facts for Kids. Kiddle Encyclopedia.